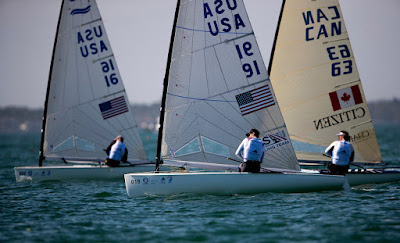 MIAMI, Fla. (January 19, 2019) – The US Sailing Team’s first major international event of the year approaches quickly with the start of the 2020 Hempel World Cup Series Miami. On Monday, January 20, U.S. 470, Finn, Laser, Laser Radial, and RS:X athletes will have the chance to kick off the year on home waters.
For three of the seven classes, the event will serve as a piece of the U.S. Olympic trials. Sailors in the Men and Women’s 470, Men and Women’s RS:X, and Finn classes will face the second of three selection events that determine the Sailing athletes that will represent Team USA at the Olympic Games Tokyo 2020.


On the other end of the spectrum, three U.S. Women’s 470 boats are within a point of one another. US Sailing Team athletes, Atlantic Brugman (Winthrop, Mass.) and Nora Brugman (Winthrop, Mass.), will be facing off with the U.S. team, Nikole Barnes (Miami, Fla.) and Lara Dallman-Weiss (Shoreview, Minn.), and the young U.S. duo, Carmen Cowles (Larchmont, N.Y.) and Emma Cowles (Larchmont, N.Y.).


US Sailing’s Olympic Head Coach, Luther Carpenter (Cypress, Texas), is looking forward to watching these sailors prepare for an important leg of the trials. “We've had two regattas here in the last month, and it’s been good practice for the coaches and sailors,” he said. “It’s always great to see how we perform when we have to bring our best. It's one of the best learning tools for all of us.”


In addition to proceeding with the U.S. Olympic athlete trials, the American 470 Women will secure U.S. representation at the Tokyo 2020 Games. As there are more countries competing in Olympic classes than there are spots at the Games, countries have to qualify for representation. This event serves as the North American country qualifier. As the U.S. is the only North American country registered to compete in the Women’s 470 class, the country has all but officially earned the berth.


Thanks to relatively small fleets at this event, it’s unlikely either point-spread will be significantly extended or shrunk in Miami. Rather than focusing on the trials, Carpenter has been working with Muller and Paine to focus on making as many improvements as possible.


“I don’t want them to be completely focused on each other, I want them to be focused on the improvements we have to make,” said Carpenter. Keeping a bigger picture in mind, he continued, “If we don’t improve a lot in the trials process, it makes the final goal harder to reach.”


Erika Reineke will also be representing the US Sailing Team in the Women’s Laser Radial Fleet. Though the event is not an element in her Olympic trials, Reineke is looking forward to competing on home waters leaving her best on the racecourse.


Racing will begin on Monday, January 20 at 11:00 a.m., local time (GMT -5). Thanks to solid wind forecasts, the Race Committee is optimistic that the regatta will feature the full schedule of races. All of the classes will have 10, with the exception of the RS:X classes, who have 15. On Saturday, January 25, the top ten boats in each fleet will compete in a final, additional Medal Race.