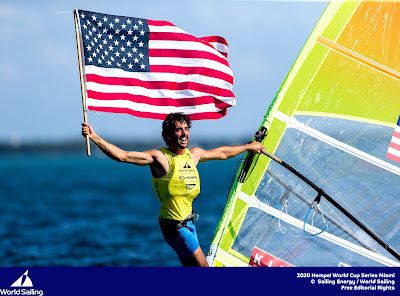 MIAMI, Fla. (January 23, 2020) –  Miami delivered surprising conditions for the final day of the 2020 Hempel World Cup Series Miami. Contrary to the forecast, the Race Committee was able to fire off all of the Medal Races, allowing four American sailors to secure Medal victories, three Gold and one Bronze. On the final day of the regatta, U.S. athletes in the 470, RS:X, and Finn classes also capped off the second of three events that make up the U.S. athlete Olympic trials.


Athlete Pedro Pascual (West Palm Beach, Fla.) is the Men’ RS:X Gold Medalist and the recipient of this year’s Golden Torch Award, an honor given to the top American sailor at this event each year. After winning today’s Medal Race, Pascual became the first windsurfer to earn the award.
He had an incredibly steady week at the front of the RS:X fleet. He led from day one and never finished a race below third place. Pascual also demonstrated his ability to perform in the full range of conditions that sailors experienced on Biscayne Bay.
“It’s awesome to win a World Cup,” said Pascual. “It’s my first time winning an event in the senior class and it was really hard to stay consistent this week. We had really different conditions. Today, I came into the Medal Race with a lead of 11 points, so I didn’t necessarily have to win the race to win. I just focused on controlling the fleet and staying close to everyone but still sailing my own race.”
Pedro’s victory will give him a buffer of few more points in the U.S. RS:X Men’s trials. After a strong showing this week and finishing fifth overall, Geronimo Nores (Miami Beach, Fla.) trails by 12 finishing positions heading into the 2020 RS:X World Championships.
Yesterday, Caleb Paine secured his Gold Medal in the Finn class. Today, his teammate Luke Muller (Fort Pierce, Fla.) secured the Bronze, despite taking a penalty turn in the exciting Finn Medal Race.
“I took more risk than some of the other boats on the upwinds, but I did what I thought was going to pay,” Muller said. “Then on the last downwind, because I was pushing so hard to pass as many boats as I could, I got a penalty. The points were such that if I pushed it and broke the [propulsion] rule, I would still be okay, but if they didn’t penalize me, I was closer to getting Silver. So, in my mind, it was a good risk.”
Muller will continue to lead the U.S. trials. Currently, he has a buffer of six finishing positions between him and Paine. The victor will be determined at the 2020 Finn Gold Cup.
Also bringing home a Gold Medal today is Laser Radial athlete Erika Reineke (Fort Lauderdale, Fla.). Reineke went into today’s Medal Race leading the fleet by only two points. The race was an exciting tactical battle with Vaselia Karachaliou (GRE) for the Gold. Neck and neck through the final downwind leg, Reineke finally solidified a Gold Medal win after Karachaliou received a penalty from the jury.
“Off the start, I felt really good,” said Reineke. “I tacked and I was at the front of the race and then I messed up one shift and my competitors split from me. Vasileia played the first beat extremely well and I tried to keep my head in the game and not give up. On the last downwind I covered her and unfortunately, she got a flag, but that’s the sport. I had to beat her [Vasileia] in the race and the Italian [Talluri] was also very close so I just went out there trying to win.”

Reineke was ecstatic to win her first race of 2020. “It feels really good. I’m still trying to get my head around it, but it feels great. The nerves got to me during the race. I dropped my tiller extension, and I had bad mark roundings, but now it’s great. I couldn’t have done it without my coach, Steve [Mitchell], my team and support.”
In the Women’s 470 Medal Race, Carmen and Emma Cowles (Larchmont, N.Y.) finished in fifth place and first among the American teams. Atlantic and Nora Brugman (Winthrop, Mass.) also appeared in today’s Medal Race. The pair finished the final race in eighth, to end up ninth overall. The Women’s 470 trials will remain incredibly tight as they head into their 2020 World Championship. The Brugmans lead by one point over the Cowles and three over Nikole Barnes (Miami, Fla.) and Lara Dallman-Weiss (Shoreview, Minn.).
With the exception of the Men’s Laser, the remaining fleets likewise had American representatives in the final races of the event. In some unfortunate circumstances off the starting line, U.S. athletes in the Men’s 470 and Women’s RS:X fleets received penalties for being over the line just before the starting signal. Men’s 470 sailors Stu McNay (Providence, R.I.) & Dave Hughes (Miami, Fla.) finished eighth overall and Women’s RS:X sailor Farrah Hall (Annapolis, Md.) finished fifth.
Both Hall and team McNay/Hughes are comfortably leading their trials, with almost no American competition for the spots on Team USA for the 2020 Games.
Overall, the 2020 Hempel World Cup Miami was an excellent display of Olympic class racing. The regatta featured six days of challenging conditions ranging from light and shifty, to heavy chop and high winds. After packing up and returning the US Sailing Center Miami to its normal operations, the US Sailing Team will turn its focus to the upcoming World Championships in Australia and the 51st Trofeo Princesa Sofia Regatta in Spain.