Day Five: U.S. Athletes Line up for Medals in Miami 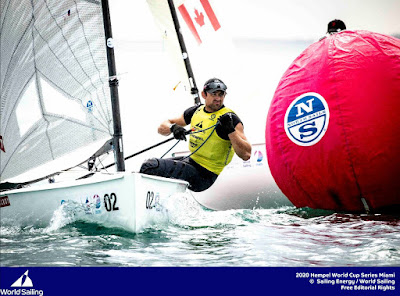 MIAMI, Fla. (January 23, 2020) – The athletes and Race Committee were again challenged by today’s fluky conditions at the 2020 Hempel World Cup Series Miami. Each of the classes, with the exception of the Lasers and RS:X fleets, were able to complete at least one race despite the fickle and light breeze.


The Finn sailors were the only fleet to complete both of their scheduled races today. Rounding out a full series of 10 races, the U.S. will begin tomorrow’s Medal Race with two athletes in contention for Medals, one of which is a guaranteed Gold.
Caleb Paine had an incredibly steady week at the top of the leaderboard. Apart from the 11 points he earned in today’s first race, he never finished below second. He attributes the continued dominance over the fleet to approaching the event as if it weren’t playing a role in the U.S. athlete trials.
“I just focused more on the sailing and not all of the stuff that surrounds it, the trials and all of the drama behind that and everything else that brings to the table,” he said. “I was really thinking about what makes the boat go fast and what gets it around the racecourse as quickly as possible.” Comfortably winning the Gold, Paine has little to worry about tomorrow, “I’m just going to implement the same strategy and go out there and do what I love.”
Paine’s 23-point lead guarantees him a Gold Medal tomorrow. Fellow U.S. competitor, Luke Muller (Fort Pierce, Fla.), follows closely behind in the Bronze Medal position. He and Kyle Martin (CAN) are currently tied with 36 points. Though Martin is currently winning the tiebreaker for the Silver Medal, their final standings will be decided tomorrow.
Tomorrow’s race will also be a first for U.S. Finn athlete, Eric Anderson (Chicago, Ill.). His inaugural appearance in a Medal Race is an exciting challenge that Anderson looks forward to, “It’s going to be a good experience. It’s good practice and I’m excited for one more good race here in Miami.”
Despite not having any races today, three American RS:X sailors are lining up to take home some hardware. Pedro Pascual (West Palm Beach, Fla.) established an early lead and has remained on the top of the Men’s RS:X scoreboard throughout the week. He has already guaranteed himself a medal win and has a solid 11.5-point lead for the Gold.
Just behind Pascual, Geronimo Nores (Miami Beach, Fla.) will have a shot at his first World Cup medal. He’s currently in position for the Bronze with four and a half points between him and the Silver. In the Women’s RS:X fleet, Farrah Hall (Annapolis, Md.) also stands in the Bronze position. She has two points separating her from the nearest competitors on either side.
Each of the 470 classes finished one race today. US Sailing Team athletes Atlantic and Nora Brugman (Winthrop, Mass.) won the only Women’s 470 race of the day to move up to 8th overall. They and fellow U.S. athletes Carmen and Emma Cowles (Larchmont, N.Y.) will both appear in tomorrow’s Medal Race.
In the Men’s 470 fleet, Stu McNay (Providence, R.I.) and Dave Hughes (Miami, Fla.) finished today’s race in 7th. The pair will begin the double-point Medal Race with everything to gain. They currently stand in fifth place, just seven points away from first.
Like the 470s, The Laser Radial fleet only saw one race today. Erika Reineke (Fort Lauderdale, Fla.) finished 14th, but remains in the Gold Medal position. She has a two-point gap between her and the boat that is currently in position to win the Silver.
The Men’s Laser sailors weren’t able to get another race in, and the U.S. won’t see any stars and stripes in their Medal Race tomorrow. Leading the Americans is Malcolm Lamphere (Lake Forest, Ill.), who is in 13th.

Thanks to more challenging forecasts, the first race is scheduled for 9:07 a.m. local time (GMT-5). To watch the LIVE coverage of the Medal Races, click here.