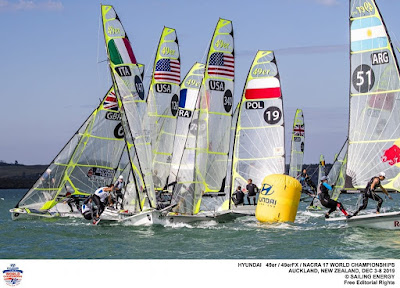 Thanks to another packed day of racing in Auckland, all three fleets at the 2019 Hyundai 49er, 49erFX and Nacra 17 World Championships battled tricky conditions to complete the qualifying series. In the 49er fleet, Nevin Snow (San Diego, Calif.) and Dane Wilson (Ojai, Calif.) clinched their first appearance together in Gold Fleet and are currently standing just a few points outside the podium.
After a nearly one-hour tow to the outer racecourses on the Hauraki Gulf, the three 49er fleets sailed the final day of the qualification series in a 7-12 knot northerly. It was difficult to pick which side of the course to favor, as clouds from the west gradually intruded onto the courses, complicating and eventually weakening the late-morning Seabreeze that developed.

Olympic Sailing veteran, Charlie McKee (Bend, Ore.) who is providing coaching support for the U.S. 49er athletes, elaborated on the day’s challenging conditions, “Those that did best were solid on the start line, decisive in their upwind calls, and patient downwind.” He also noted the difficulty to sail consistently in the conditions, “Many of the top teams found themselves struggling to retain any consistency in the conditions, and the performance and depth of the young U.S. 49er team has actually been one of the talking points throughout the boat park.”

The U.S. 49er team’s popularity in the boat park is likely in part due to the consistency that Nevin Snow and Dane Wilson have exhibited so far. Snow and Wilson have yet to finish a race in the double-digits and are currently standing just four points outside a podium position.

US Sailing Team 49er coach, Mark Asquith (GBR) attributes their consistency to their focus on the water, “They kept their routine strong and executed well on the parts of the race they knew they could control. They avoid traffic as much as possible, stay sharp on the numbers, and only take the opportunities to create leverage when they felt it was a sure thing.”

On today’s conditions, Asquith also noted, “It was a very passive day about taking what was dealt.” In the boat, Wilson agreed that adaptability was essential to performing well in the variable conditions. “We focused on getting off the line well and keeping an open mind to the conditions since they’ve been changing a lot,” he said. “We were able to get to open space and sail our boat fast in the direction we wanted to go. The concept is nothing too complicated, but we executed it well.”

While Snow and Wilson continue to put together an impressive series, several of the U.S. 49er athletes saw some positive results today. McKee said, “Ian [Barrows] and Mitchell [Kiss] got themselves out of some tough spots to put up pretty good scores, and both Harry [Melges IV] and Finn [Rowe], and Judge [Ryan] and Hans [Henken] upped their game from the previous day.”

Being adaptable to the changing breeze directions became even more important for the fleets that raced in the afternoon. Nacra 17 and 49erFX sailors were kept on their toes by the dying afternoon sea breeze which faded into a long transition zone and finally built again from the southwest.

According to U.S. Olympic Coach and Performance Manager, Sally Barkow, the U.S. Nacra athletes were focused on “clean starts and first beat decisions which needed to be adjusted when the legs got shorter and shorter through the afternoon.” In addition to making constant adjustments on the upwinds. Ravi Parent (Sarasota, Fa.) and Caroline Atwood (Clinton, Conn.) saw some advances on the downwind legs. Barkow continued, “Ravi and Caroline also made some improvements downwind in speed and technique, making some solid gains into the final run of the last race of qualifying series.”

Like the Nacra fleet, the FX sailors raced in the afternoon conditions. Though Paris Henken (Coronado, Calif.) and Anna Tobias (Pittsburgh, Penn.) slid back a bit after starting the day leading the FX fleet,  the pair finished in the top ten twice and are ranked ninth overall.