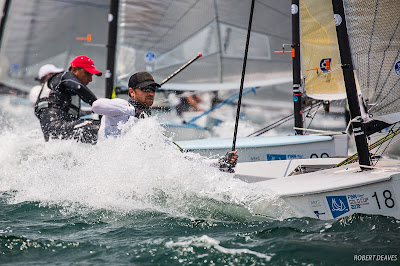 MELBOURNE, AUS (Dec. 21, 2019) - The 2019 Finn Gold Cup wrapped with what was probably the windiest day on Port Phillip. For the final races of the event, the athletes saw a southerly breeze at about 15-21 knots. The day began with the final fleet race for all teams outside the top ten and wrapped with the medal race featuring the competitors at the front of the pack.


Luke Muller (Fort Pierce, Fla.) and Caleb Paine (San Diego, Calif.) will end the event on a high note. Both athletes sailed in the front of the pack for both laps of the final race. US Sailing’s Olympic Head Coach, Luther Carpenter (Cypress, Texas), said, “Today was your classic physical kind of test with a long course, big waves, and windy conditions. They battled hard around the course.”
After some strong downwinds, Muller ended up fifth in the race and ranked 17th overall, third in the under 23 category. Meanwhile, Paine was quite fast out of the box and rounded the first windward mark in near the front. He finished the race in eighth and stands in 25th overall. Also representing the U.S., Eric Anderson (Chicago, Ill.) finished the final race in 32nd, ending up 42nd overall.
Though the overall scores aren’t what the U.S. contingent was hoping for coming into the event, Carpenter says the team has come away with valuable insight, “Clearly we didn’t perform our best event here. It was a part of our trials, and that wasn’t a huge focus of the regatta, but was likely floating around somewhere in their minds.”
As Carpenter mentioned, this event was one of three that will make up the Tokyo 2020 Sailing Olympic trials in the Finn class. Though it will obviously impact who will represent Team USA in this class, Carpenter and our US Sailing Team athletes are more focused on the bigger picture.
Carpenter continued, “Rolling forward, we know that we can’t go to the Games without fixing each of the challenges that Caleb and Luke have. I think knowing that will help create an even stronger team atmosphere. There are exciting new downwind techniques to work on together, the fitness side is something I’ve already set up in Miami, and we’ve got no time thinking about trials business. For either one of them to compete at the Olympics, we have to fix each of their weaknesses. So I think we’ll have a stronger working dynamic coming out of this experience.”
For now, the sailors are packing up and heading home to enjoy the holidays before hitting the campaign trail again in early January. “We’re looking forward to packing up the container and getting on some airplanes to catch the last round of eggnog before Christmas starts,” said Carpenter. After some well-deserved recovery time, the U.S. Finn squad will reunite in Miami to begin preparations for the 2020 Hempel World Cup Series Miami.
Finn Gold Cup, U.S. Results: