Vele Storiche Viareggio: a historic sailing boat for disabled people and the Falchette of AIRC for the fight against cancer will also take part in the 15th gathering 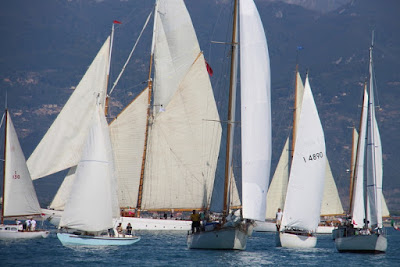 Not only regattas.  The 15th edition of the Vele Storiche Viareggio gathering, to take place from the 17th to the 20th October, is set to contain numerous initiatives linked to naval tradition.  Among the 50 boats expected in Viareggio there will also be Cadamà, the first classic wooden boat to be equipped for wheelchair users, and Tirrenia II, built in 1914, the boat-symbol of this edition, with on board the Falchette of AIRC who will be promoting cancer research.  Anyone who wishes will be able to follow the regatta onboard historic boats.


THE FLEET OF HISTORIC SAILING BOATS EN ROUTE TOWARDS VIAREGGIO
The subscriptions for the 15th Vele Storiche Viareggio gathering, which has reached the considerable number of 60 participating boats, are now closed.  The event, which will take place from the 17th to the 20th October 2019, has been organised by the Association of the same name together with Club Nautico Versilia, who like every year, will contribute decisively to the perfect success of this important gathering; CNV offer their  prestigious clubhouse, other structures necessary to receive crews, and vehicles for assistance on the quay.  “This year too”, stated Gianni Fernandes, President of VSV, “there will be three regattas, from Friday to Sunday.  Anyone who wishes can follow them by sea onboard the sailers Pandora, Nellie, the ketch Armelea or the classic motor-yacht Ramona, by sending a request on our website https://velestoricheviareggio.org/benvenuti-a-bordo/ . Moreover,  the boats that will arrive from the South can take advantage of a mooring agreement, valid from the 14th to the 27th October, in the Port of Pisa (segreteria@portodipisa.it )”. “The Vele Storiche Viareggio gathering”, Admiral Marco Brusco, Vice-President of Club Nautico Versilia, added, “has grown continually bigger. The fact that this is the 15th edition is proof that our Club, together with Vele Storiche Viareggio, has never stopped believing in an event that has always put first the protection and care of historical boats. First and foremost it is a cultural initiative, focused on keeping memories alive, and it has absolutely no commercial side”.  The XV Vele Storiche Viareggio gathering is patronized by the FIV, Federazione Italiana Vela, with the collaboration of AIVE, Associazione Italiana Vele d’Epoca, which is responsible for the tonnage measurement of the boats and for the classifications of those who choose to race with a CIM tonnage certificate.

CADAMA’, THE BOAT FOR DISABLED PEOPLE PRESENTED TO CLUB NAUTICO VERSILIA
On a recent occasion before the gathering, Club Nautico Versilia organised a conference to present Cadamà, a 22-metre Bermudian Ketch, the first maxi yacht in wood, built in 1971 to a design by the yacht designer Laurent Giles, and today equipped to race with disabled people on board. The boat, commissioned originally by the industrialist, ex-Chairman of Milan Football team Albino Buticchi, will take part for the first time in the Viareggio gathering with up to four people in wheelchairs on board. The project, commissioned and promoted by the 52 year-old Milanese Andrea Brigatti, in a wheelchair since 2003, is supported by the Association ‘I Timonieri Sbandati’. Cadamà, based in Riva di Traiano, took part in 2018 in the 50th edition of the Barcolana in Trieste, where she finished in 206th place out of 2689 participants.

LE FALCHETTE DI AIRC IN A RACE AGAINST CANCER
The Falchette di AIRC will board Tirrenia II in Viareggio, an entirely female crew captained by the writer and sailor Lucia Pozzo, who will promote the activities of AIRC Foundation for the Research against Cancer. The Foundation, born in 1965, supports scientific projects aimed at supporting research for the cure of oncological diseases. The Falchette-sailors will take part in the regattas and will be available to talk to anyone who wishes to know more about the goals reached so far, the grant that bears their name, the initiatives taken at a national level and any future meetings. In the past the Falchette have taken part in important sailing events such as the 151 Miglia, the Women’s Sailing Cup and the Millevele in Genova.  It will be the first time that they board a centenarian historic sailing boat like Tirrenia II in Viareggio.

THE PRIZES TO BE WON
All the yachts taking part in the XV gathering of Vele Storiche Viareggio, whether they are members of VSV or not, will be able to compete for the Challenge Ammiraglio Florindo Cerri and for the Trofeo Vele Storiche Viareggio. The boats built by the well-known Ligurian boatyard Sangermani will also be able to compete again for the prestigious Trofeo Challenge Sangermani, won in the past by titled boats like Chaplin, built in 1974 and belonging to the Italian Navy, Namib, built in 1967, and the 6 Metre S.I. (International 6 Metre Class) Valentina, built in 1975. About ten Sangermani boats are expected in Viareggio.  After 80 years the Coppa Tirrenia II will be awarded again, to the boat which during the present year has made, and documented, the most interesting trip on the high seas, giving importance to the cruising aspect independently of the miles sailed.  This cup takes its name from the yacht built in 1914 and just recently restored by the boatyard Cantiere Del Carlo in Viareggio.  The prizegiving will take place on Sunday, 20th October, after the last regatta planned, in the rooms of Club Nautico Versilia.