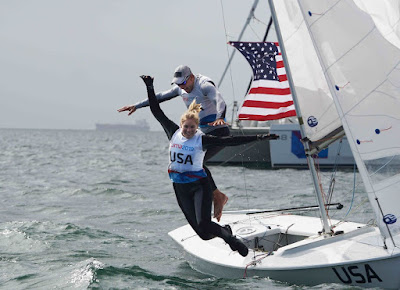 
Rodriguez and Schiffman maintained dominance over the Snipe fleet for the entire week. From the first day of racing, the pair stood atop the leaderboard. While Rodriguez is a decorated and well-seasoned Snipe sailor, Schiffman never competed in a doublehanded boat prior to beginning training with Rodriguez, five months ago. “I had never crewed before, so I had to learn how to sail with a teammate,” said Schiffman. “Working together and communicating was really difficult at first, but we had a much better grip on it this week.”

As someone who normally sails alone, Schiffman is used to driving the boat. In the Snipe, she competed as Rodriguez’s crew. She admitted that the switch from driving to crewing was uncomfortable at first, “When I’m in the front of the boat, I feel so blind to what’s happening to the rest of the boat. I basically had to figure out how to work the boat when I’m not steering and be comfortable with that unnatural feeling.”

While getting comfortable with a new position in an entirely unfamiliar boat, Schiffman also endured some bruises this week. Despite the hurdles they encountered, the pair prevailed and are pleased with their Gold Medal performance, “As Leandro [Spina (Miami, Fla.), US Sailing’s Olympic Development Director and Pan American Games Coach] said earlier this week, ‘bruises are temporary, but Medals are forever,’” said Schiffman.

In the 49erFX fleet, Roble and Shea went into their final race with a comfortable lead. The pair sailed a conservative race to lock in the Silver Medal and qualification for U.S. representation in the 49erFX class at the Olympic Games Tokyo 2020. Thanks to his performance early in the week, Cyr also began his Medal Race day with a guaranteed medal. He finished with a Bronze Medal in the Open Formula Kite fleet.