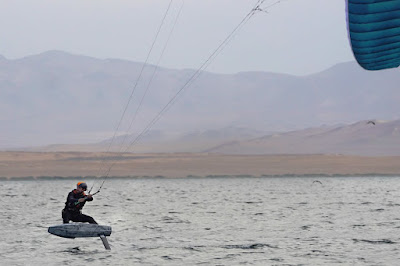 PARACAS, PERU (August 5, 2019) – Day three of the Pan American Games Lima 2019 sailing events finally delivered the conditions that sailors were hoping to see on the Bay of Paracas. After another postponement early in the day, every class managed to score at least two races in an 8-to-12-knot southerly sea breeze this afternoon. Now that each fleet has some races in the books, Team USA is leading three fleets with promising results across the board.
Day Three, U.S. Pan American Games Sailing Team Standings

Among the sailors leading their fleets is Team USA Formula Kite athlete, Will Cyr (Grosse Pointe, Mich.). Cyr is the first athlete to officially represent Team USA in the Formula Kite class. “I’d like to say that it’s a lot of pressure,” he noted, “but honestly, the practice over the last six months has been so exhausting, that sailing four races each day almost feels like a break.” Cyr trained intensively for his first Games experience. After logging at least 100 miles on the water each week in the period leading up to the Games, it’s safe to say he is prepared. “I flew to San Francisco multiple times to train with one of our top USA riders,” said Cyr.

The Formula Kite class is slated to be included in the Olympics Games Paris 2024, for the first time. While the 2024 Games are on Cyr’s radar, his focus is certainly still on Lima 2019, “Without a doubt, this is the first step on a very tall ladder. For now, I’m looking forward to the rest of racing. I realize that I’m not going to win this event on the first day, so I’m just trying to stay calm and conservative.”

The Formula Kite is among three classes that Team USA is currently leading. Charlie Buckingham (Newport Beach, Calif.) is leading the Men’s Laser class and Ernesto Rodriguez (Miami, Fla.) and Hallie Schiffman (Sarasota, Fla.) have established a commanding lead over the Mixed Snipe fleet. Rodriguez and Schiffman are currently six points ahead of their next closest competitors. Schiffman attributed their success today to great speed and positioning on the course.

Both she and her skipper, Rodriguez, have had considerable success in single-handed boats. Schiffman primarily sails the Women’s Laser Radial at Olympic class regattas. She mentioned that though the switch to sailing with a teammate is unnatural at first, she’s grateful to have the experience. “It’s difficult, but I’m really happy with how it’s going,” said Schiffman. “Something different with Ernesto is that he's always on, all the time. The intensity never stops. That’s something that I can’t wait to bring back into my own Radial sailing.”

Results
Results will be available on the event website.