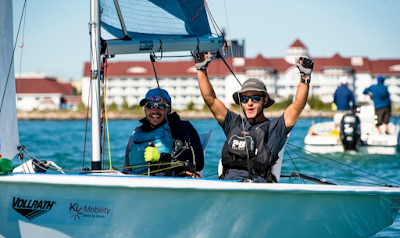 Almost 100 sailors from 28 nations are all set for the 2019 Para World Sailing Championships in Puerto Sherry, El Puerto de Santa María, Cadiz, Spain from 1-7 July.   Puerto Sherry, which recently hosted the 52 Super Series Royal Cup, will provide a picturesque setting for a scheduled 60 races to take place over four classes.
The 2.4mR, Hansa 303 Men and Women and the RS Venture Connect, which was first seen at the Para Worlds last year, all return for 2019.   And three out of the four sets of 2018 gold medallists are back to defend their titles, while 16 Paralympians across all fleets will make these World Championships even more competitive.

The Hansa 303 Men’s fleet is the biggest in the competition, with 37 sailors involved – three more than last year.   They will race in a split fleet and 10 boats will progress to the Medal Race.    Australian Chris Symonds clinched the 2018 gold after winning the final race. Having also won silver in 2017, he will be eyeing another podium finish and will certainly prove tough to beat this week.

The final day last year saw a tasty duel between compatriots Wademar Wozniak and Piotr Cichocki of Poland, with Wozniak just pipping 2017 gold medallist and Paralympian Cichocki to the silver medal. Both are set to revisit their rivalry in 2019.

Brazilian trio Herivelton Ferreira, Jose Matias Goncalves de Abreu and Antonio Marcos do Carmo all competed in the Rio 2016 Paralympics and, along with fellow Paralympian Sergio Roig (ESP), make up a strong fleet.

Marques won the race to seal the gold medal, as Paralympian del Reino, who topped the fleet in 2017, had to settle for bronze behind Wickham.

In an increased fleet size from last year, other returnees include Olga Górnas-Grudzien (POL), Miray Ulas (TUR) and Jana Mestre (ESP). The top six will qualify for the Medal Race at the end of the week.

After a successful first year at the Worlds in 2018, the RS Venture Connect fleet will see 10 teams battling it out, with only four of them returning from last year.  Will Street & Johnny Currell (GBR), gold medallists in Sheboygan, are back to see if they can clinch consecutive world titles.

Last year’s ‘winner-takes-all’ format in the final race, which will also feature this year, saw Street & Currell triumph in the final showdown to take to the top of the podium, making a dramatic comeback from an early penalty for hitting the first mark.

Sailing on home waters this year, Spaniards Gabriel Barroso de Maria & Enrique Vives will be aiming for another top-three finish after they won silver in 2018.   And Canadian 2016 Paralympic medal winners John McRoberts (silver, SKUD18) & Scott Lutes (bronze, Sonar) will be shooting for another medal as they aim to improve on last year’s bronze.

Great Britain’s double Paralympic bronze medallist Alexandra Rickham and fellow Paralympian Hannah Stodel, who finished fourth in 2018, will not be back to challenge for a medal this year.   Amongst the new teams competing this year are Italian Paralympic duo Marco Gualandris and Fabrizio Olmi, who will be sailing with Emiliano Giampietro and Davide Di Maria respectively.

The 22-strong contingent contains numerous Paralympians, most notably the most successful in Paralympic history, Damien Seguin (FRA).   Having won Para Worlds bronze in 2017 and silver in 2018, Seguin, who took gold in Athens 2004 and Rio 2006 and silver in Beijing 2008 in the same class, will be keen to top the fleet this time around.

Four-time Paralympian Bjørnar Erikstad (NOR) and fellow Paralympian Antonio Squizzato (ITA), who recently won the 2.4mR EUROSAF European Championship title, are joined in the fleet by Jackie Gay (CAN), who won silver with husband John McRoberts in the SKUD18 class at Rio 2016.

Niko Salomaa (FIN) and Arturo Montes-Vorcy (ESP) complete the Paralympic line-up at this year’s Para Worlds.   As with the Hansa 303 Men’s fleet, the 2.4mR will hold a final Medal Race for the top 10 competitors.

The Opening Ceremony is set to take place at 21:00 local time on Tuesday 2nd July following a day of practice races, with racing set to start officially at 12:00 on Wednesday 3rd July.