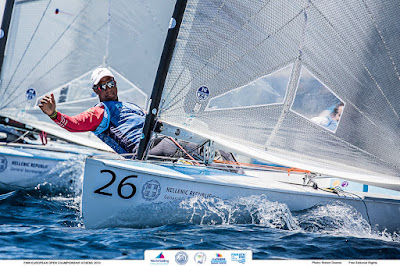 The Finn class has a long history and has been witness to many changes in the sailing world. It originates from a, perhaps, more simpler time, when many of today’s problems did not exist. The original intention of the design, to allow people to build their own boats and compete in friendly international competition, led to a robust set of Class Rules, that have been developed and fine tuned to cope with changes in technology and safety, but while leaving the basic shape and structure untouched.


Today the class is strong because of the consistency and commercial competitiveness brought about by these Class Rules. They created an open market, where anyone could build a Finn, but also such that builders could make equipment commercially available in competition with other builders. Each boat is tested for dimensions, for weight and most importantly, for weight distribution. There are no super Finns and no way to create a super Finn; there are only the Class Rules.

Over time various builders have found favour with the sailors and it is not uncommon for one builder to create fast boats that everyone wants: Tormentor, Raudaschl, Taylor, Vanguard, and today Devoti.

That Devoti Sailing is the most common builder in recent years led World Sailing President Kim Andersen to incorrectly state in an interview with Sail-World, published 24 October 2024, “In the Rio Olympics, the Finn class is probably the biggest monopoly. Because there are 23 boats, 22 of those came from the same manufacturer.”

Whether by intent or implication, this message was previously stated by World Sailing CEO, Andy Hunt. In a letter to World Sailing members, dated October 15, he wrote, “One common argument for measurement controlled one design is that anybody can produce everywhere in the world - the facts are far from this... For instance, for the Finn … 22 out of 23 boats in Rio … from one single manufacturer. So despite even in a free to build market, the potential for exclusivity remains.”

Furthermore, at the 2018 Sailing World Championships in Aarhus there were four mast manufacturers, nine boom manufacturers, eight foil manufacturers and five sail manufacturers represented within the Finn fleet.
Even though the top sailors tend to control perceived differences by herding towards one hull builder, competitive hulls are freely available from at least four or five major builders, and all are capable of winning at the highest level. Herd mentality is prevalent in any fleet and in many sports. But it doesn’t create a monopoly. It is still all about customer choice and market forces, the principles on which World Sailing’s FRAND (Fair, Reasonable, and Non-Discriminatory) strategy is based.
Indeed, the World Sailing Olympic Equipment Strategy, agreed by Council in November 2018, contradicts the former statements when it states that the Finn “already provide[s] access to the market in FRAND terms.”
In fact, of all the current and proposed Olympic classes, the Finn is the most FRAND of all.

For the Finn, no license has, or has ever been, required. It is all down to choice, and that is a fundamental concept of FRAND principles. Anyone is entitled to build a Finn to the freely available class rules. As a measurement controlled class, it is not open to illegal modifications, or ‘allowable’ building tolerances.  It is either a Finn or it is not a Finn. There is no middle ground. There is no scandal waiting to be exposed. It is a safe, and proven option.
This rigorous and carefully controlled measurement process is one of the reasons the Finn has created a solid reputation for reliability and quality. It is a completely open market.  Market forces are king and the sailors will always migrate to the builders they think will provide the best quality, the greatest reliability and the best chance of winning. History proves this to be the case.
The close controls of measurement – such as accurate templates and the Lamboley swing test to control weight distribution – as well as quality controlled production means that Finns are more similar to each other than virtually than any SMOD (Single Manufacturer One Design) class.
The Finn class has at least 10 hull builders across four continents, and countless manufacturers of equipment and parts. The Finn has been eminently suitable for Olympic competition for 68 years and nothing has changed in that regard.  In fact the boats are better quality, more reliable and more accessible than ever before. The boat is fun, fast and appeals to a huge range of sailors across the world.
Hulls are built to the most exacting and repeatable standards, with strict controls to ensure quality and reliability. The hull requires refined and skilful handling and rewards those who train hardest. It is the perfect epitome of Olympic sailing ideals and the perfect bridge between youth classes and a career at the top of the sport such as the America’s Cup and The Ocean Race.
At a time when FRAND and contractual obligations are becoming a distraction to maintain or create virtually all other Olympic classes, the Finn remains steadfast and open to all sailors and builders, as it has always been.