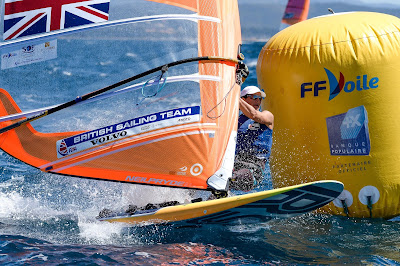 There may be some early celebrations in the Italian city of Civitavecchia tonight after their local duo won all three of the races in the men’s RS:X on the second day of the 51st Semaine Olympique Française in Hyères.   Daniele Benedetti followed the magnificent first day of his compatriot, Mattia Camboni, by winning the first two races comfotably before Camboni won the third to open up an already significant gap as the overall leader.


“Yes, just one city won today,” Camboni said. “I’m always competing with him (Benedetti). We’re always together, we live in the same city and the same building close to Rome on the sea in Civitavecchia.”
Almost perfect stable racing conditions graced the second day and the big names made it count. If Monday was about staying calm while waiting for the wind, Tuesday was about knowing how to capitalise.
The forecast filled in overnight and the sailors were greeted with easterlies of up to 12 knots as the morning wore into lunchtime.

RS:X Men
Poland’s Piotr Myszka, fourth at 2016 Rio Olympics, splits the Italians at top of the leaderboard, but Camboni has no significant discard yet after not finishing out of the top three in six races. He leads by 17 points already.
But it was Benedetti’s day.  “It was windy in the first two races and I had good speed,” he said. “In the first race, I had a good start and went to the right side, got in front on the first downwind.  In the first race, I won by about 100m and in the second race by about 200-300m.”
Camboni pushed increasingly hard at the starts and it paid out in the third race.
“In the second and third starts I risked a lot,” Camboni said. “I pushed and I was afraid about UFD (being disqualified for being over the line). Daniele and I always started in different places but found our way back together. He had better starts than me in the first and second. In the last race I managed to control Bing Ye, the 2017 world champion, who’s very fast, but I think he had a lot of mistakes - too many tacks at the wrong moment.
“They all have a discard and I haven’t yet, but anything can happen, we’ll see, I’m trying to be consistent. I felt really fast again as soon as I went out, I had a really good feeling with the equipment. I’ll go home, a massage and maybe some good pasta.”