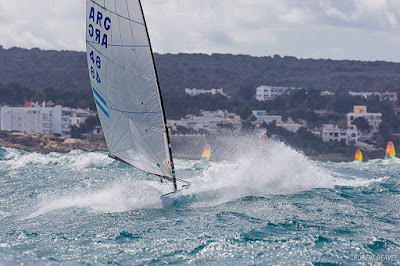 The Finn class remains focussed and committed to ensure the Finn is re-selected for the Olympics in 2024. It rejects the assertion that the Finn has had its time and should be retired. The relevancy of the Finn to the Olympics has more support now than perhaps ever before.

Since the much criticised decisions last year removing the Finn from the Paris 2024 Olympic Games it has become widely apparent that there will be no option for the heavyweight sailors in the Olympic programme after Tokyo 2020, despite what was said at the time.

This decision also ignores a policy decision approved by the World Sailing Council and Board at the 2017 Annual Conference requiring that the 2024 events: “Ensure that men and women of different physiques have an opportunity to compete” and “Include both universal events and events that showcase the innovation of sailing and demonstrate the diversity of the sport.”

These policy decisions were included in Regulation 23.1.2 (d), which says that Olympic Events and Equipment: “be attractive and accessible to young athletes from all continents, and of different size and weight, with a clear pathway from World Sailing Youth to Olympic Events and Equipment”, and Regulation 23.1.2 (e), which says: “maximise the participation of the world’s best sailors and showcase the diversity of the sport”.

Both policies have been ignored for the expediency of a different agenda, and have led to discrimination against male athletes above 85 kg.

There should now be a way to get Finn sailors back into Olympic sailing, not just the current sailors, but also the large, tall and heavy youth of the future who no longer have a ‘clear pathway’ through the Olympic programme.

That pathway is now broken and needs to be fixed.

To not try to achieve this objective is to deny the heritage of sailing and the future of sailing for a large number of athletes. It is beholden on the sport to try to find a solution.

The feedback from countless sailors and numerous MNAs across the world in support of the Finn, and for what it represents, is a very powerful argument in favour of reinstating the class in the Olympic programme.

The decision to remove the Finn, albeit seen as collateral damage to gender equality and ‘innovation’, and the lack of transparency within the processes and procedures that facilitated that decision, has damaged the reputation of sailing and reduced the relevancy of the Olympics for a vast number of sailors across the world. The legacy and presence of the Finn in Olympic competition remains a powerful motivator for inspiring all sailors, young and old.

Hopefully in November 2019 enough MNAs will recognise the negative consequences of the November 2018 decision and present a submission to reopen the case and find a way to reinstate the Finn.