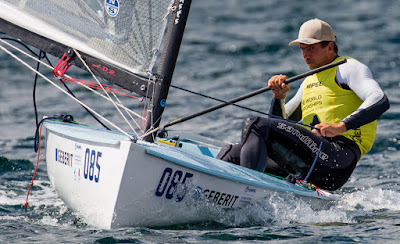 Since they were first launched into the Finn fleet three years ago, Art of Racing booms have become the boom of choice for the front of the fleet. 2018 became a breakthrough year for the fledgling company after some solid recommendations and results in the previous year. The high point was the 2018 Finn Gold Cup in Aarhus where the booms were used on seven out of the top 10 overall, including the top four.
After years of development and marketing, the company finally had the confirmation it needed to showcase the booms to the wider market and set up stockists across Europe. This coming week at the Nautic de Paris boat show, the booms will be on display on the Finn France stand, and available to purchase and take away.
Art of Racing was established by Alistair, Oscar and Russell (AOR), in New Zealand in 2011 with the goal of making the best Finn and OK Dinghy booms in the world. After a few years of development and the Mach 1 and Mach II prototypes, the Mach III Finn boom was introduced in 2016 with Josh Junior (NZL) using the prototype in the Rio Olympics. Full production was launched in 2017 and it has proven to be extremely popular with the world’s best Finn sailors.
AOR director Mike 'Oscar' Wilde says, “The whole project has been interesting and challenging. The aim was to produce the stiffest boom with the best fit out, while also looking great. I think we achieved that with room to spare. After the Mach II prototype run, we listened to the sailors and made some adjustments in the fit out and design and produced the Mach III, which is where we are today. Sales to so many of the top sailors is all the proof we need that we got it right.”
AOR design manager Russ Wood says “AOR booms are widely regarded as the best around because we looked at every component and thought hard about how it could be improved. Everything was designed from the ground up, with a lot of innovative ideas being incorporated in the Mach III. We think it is the best Finn boom that has ever been produced, and many top sailors agree.”
2017 America’s Cup winner with Team New Zealand, Andy Maloney, began his Finn campaign at the end of 2017 and has used nothing else. “I’ve used the AoR Finn boom for my entire Finn campaign and am always impressed with the attention to detail. All the best fittings are used, and they are always developing them to be better. I can rely on the boom in whatever conditions are thrown at us which gives me great peace of mind when I’m racing in 25+ knots.”
Jonathan Lobert, the 2017 Finn European Champion added,  “I am very happy with my AoR booms. I love the quality of the product, everything has been really well optimized. I especially like the vang lever system without any shackles and the huge range of trimming possibilities with this lever system. I think I found the perfect boom for the next regattas and the Games in 2020. Good job guys.”
Art of Racing now has stockists in Australia, France, Germany, Great Britain, New Zealand and The Netherlands.
The 2018 Finn Gold Cup bronze medalist, Pieter-Jan J Postma summed up: “AoR booms just tick all the boxes, stiff, light, easy to rig and most important they are reliable. #nobrainer.”