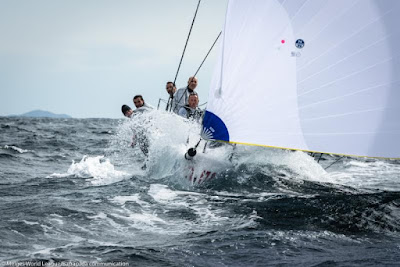 CAGLIARI, Italy (October 20, 2018) -  On a very intense, final day of racing in Cagliari at the 2018 Melges 32 World Championship hosted by Yacht Club Cagliari, defending 2017 Champion Pavel Kuznetsov at the helm of TAVATUY with tactician Evgeny Neugodnikov, and crew Alexander Patrushev, Egor Konuhovski, Konstantin Besputing, Oleg Krivov and Valeriy Zatsarinskiy, won the Class' most prestigious trophy for a second, consecutive year in a row. They are the 2018 Melges 32 World Champions!
This is truly an accomplishment within itself, as only once before has the Class been witness to a double, back-to-back World Champion. In 2013/2014 it was Jason Carroll's ARGO, today it is Russia's Pavel Kuznetsov.
The last day in Cagliari brought on more light air conditions making only one race possible. For the start, it was an "all or nothing" situation as both Matteo Balestrero's GIOGI (Branko Brcin, tactician) and Kuznetsov squared off and went to the mattresses.
Very decisively, Kuznetsov immediately went right while his opponent opted for the opposite side. As the fleet approached the top weathermark, a slight rotation in the wind tipped the scales in Kuznetsov's favor, who already had a comfortable lead. Balestrero on the other hand, found himself out of the top ten and with penalty, desperate to stay ahead of third place finisher Martin Reintjes' CAIPIRINHA (Gabrielle Benussi, tactician).
Balestrero did well to finish the race in tenth, finishing the event in second overall. For Kuznetsov, a celebration at the finish line meant he would be World Champion for a second time.
"It fills us with great pride to still be World Champions!" said Kuznetsov post racing. "This is a victory that has been building throughout the season. We suffered and struggled with our results early on, but we learned a lot from our weaknesses, keeping in mind that defending our World title was the goal. This victory is very different from last year as it was tremendously difficult - there could be no mistakes, and with only four races it would have been next to impossible to recover from a bad result. The success we feel today comes from having great discipline, control and patience as the Worlds is so different from any other event we race all year long."
Congratulations also goes to 2018 Corinthian Melges 32 World Champion Kilian Holzapfel's HOMANIT with tactician Jolbert van Dijk, and crew members Nikolaus Beulke, Albert Buitenhuis, Jeroen Hameter, Robin Jacobs, Maximilian Stein and Joshua Weber. They bested runner up Alessandro Lotto Flavio Campana on DUMBOVIT, followed by Carlo Babini Merlo sailing SKADI in third.
The Melges 32 World Championship is supported by Moby, Tirrenia, Helly Hansen, Garmin Marine, North Sails, Toremar, Norda, Lavazza, Rigoni di Asiago and Melges Europe.
Melges World League has signed and adopts the code of ethics of the Charta Smerarlda strongly promoting the values of One Ocean Foundation.
MEDIA AND RACING COVERAGE
As with all Melges 32 events around the world, racing updates will be posted online at the Official Melges 32 Facebook Page. Tune in for the latest racing information, results, video interviews, and photos. Race reports, press releases and photos will be available online each day post-racing at melges32.com.
TOP FIVE RESULTS (FINAL - After Four Races)
1.) (RUS) Pavel Kuznetsov/Evgeny Neugodnikov, TAVATUY; 4-1-2-1 = 8
2.) (ITA) Matteo Balestrero/Branko Brcin, GIOGI; 2-4-1-10 = 17
3.) (ITA) Martin Rientjes/Gabrielle Benussi, CAIPIRINHA; 3-3-4-8 = 18
4.) (ITA) Edoardo Lupi/Massimo Pessina/Lorenzo Bressani, TORPYONE; 5-6-9-2 = 22
5.) (GER) Christian Schwoerer/Nik Asher, LA PERICOLOSA; 1-11-6-6 = 24
Full Results