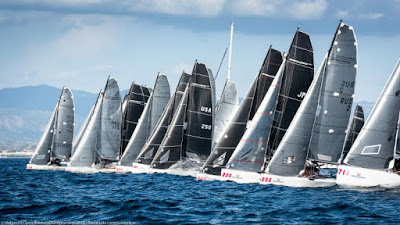 Cagliari, Italy (October 7, 2018) - The last two days have been dedicated to the 2018 Melges 20 Russian Open, a Melges World League event on the international circuit, and the last competitive meeting of the fleet before the commencement of the World Championship on Wednesday.

With four races completed, Igor Rytov's RUSSIAN BOGATYRS won the 2018 Russian Open. They are a team that has already collected several major titles including that of 2017 European Champion, and overall 2017 Melges World League Champion. Rytov, and his crew seemed at ease on the Cagliari race course, balancing out their success achieved a few weeks ago at the last event on the Melges World League, Euro circuit.
Rytov can now unequivocally consider himself the virtual pole sitter for the Worlds, taking place on the same race field hosted by Yacht Club Cagliari.
Veteran Melges 20 Class member and owner Dario Levi at the helm of FREMITO D'ARJA, and Alexander Ezhkov's PIROGOVO finished second and third respectively.
Marco Giannini's SIDERVAL landed atop the Corinthian Division podium.
If anything, the 2018 Russian Open officially confirmed those who are ready to play all their cards. Some may have even deliberately underperformed this weekend, although still considered top contenders for the title.
Therefore, Cagliari promises to be one of the most exciting World Championship venues ever. It is one of the most beautiful and spectacular places to sail, not to mention one of the most challenging from a technical standpoint.
The World Championship officially starts Wednesday, October 10 and winds down on Saturday, October 13.
The Melges World League is supported by Helly Hansen, Garmin Marine, North Sails, Toremar, Lavazza, Rigoni di Asiago and Melges Europe
Melges World League has signed and adopts the code of ethics of the Charta Smerarlda strongly promoting the values of One Ocean Foundation.
MEDIA AND RACING COVERAGE
As with other Melges 20 events around the world, racing updates will be posted online at the Official Melges 20 Facebook Page. Be sure to also follow the fleet on Instagram, Twitter and YouTube. Tune in for the latest racing information, results, video interviews and photos at melges20.com.
TOP FIVE RESULTS (FINAL - After Four Races)
1.) Igor Rytov, RUSSIAN BOGATYRS; 14-2-4-2 = 22
2.) Dario Levi, FREMITO D'ARJA; 6-3-5-9 = 23
3.) Alexander Ezhkov, PIROGOVO; 2-15-1-8 = 26
4.) Michael Cooper, EXPORT TOO; 1-6-19-3 = 29
5.) Vladimir Prosikhin, NIKA; 12-19-2-1 = 34
View Full Results