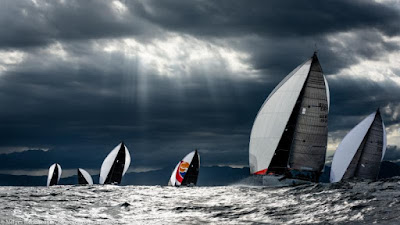 CAGLIARI, Italy (October 18, 2018) - Defending Melges 32 World Champion Pavel Kuznetsov at the helm of TAVATUY declared today at Worlds in Cagliari that he absolutely refuses to go quietly. After a stormy-day delay on Wednesday and two races on Thursday, Kuznetsov marched to the front of the fleet with a 4-1 performance putting him in first place overall and, on the path to potentially capturing his second World Championship title.

"Today was a very long and complicated day. Fortunately, we were able to be strong and focused," said TAVATUY tactician Evgeny Neugodnikov. "This is just the beginning and we have got off onto the right foot. Tomorrow we will be keeping an eye on our opponents. Each race is a story within itself. We will try to keep this pace."
With massive waves and 15 knots of breeze out of the East, the first round of racing brought Germany's Christian Schwoerer's at the helm of LA PERICOLOSA with tactician Nik Asher to the front of the pack at the first weathermark, then extended to make it an awesome race win. Right behind, a fierce battle between Matteo Balestrero's GIOGI (Branko Brcin, tactician) and reigning World Champ Kuznetsov resulted in respective second and third place finishes.
Race Two went decisively to Kuznetsov, who had no difficulty dominating fleet newcomer and second place finisher Roberto Monti on AIR IS ESSENTIAL, followed by Martin Reintjes' CAIPIRINHA with Gabriele Benussi on tactics in third.
Only six points separate the top five teams with Kuznetsov ahead by one. Balestrero and Reintjes finish the day tied with six points each in second and third overall respectively. Five points further back, Edoardo Pavesio's FRA MARTINA, and the dynamic duo of Edoardo Lupi and Massimo Pessina aboard TORPYONE round out the top five.
Racing continues on Friday, October 19 with a warning signal at noon.
The Melges 32 World Championship is supported by Moby, Tirrenia, Helly Hansen, Garmin Marine, North Sails, Toremar, Norda, Lavazza, Rigoni di Asiago and Melges Europe.
Melges World League has signed and adopts the code of ethics of the Charta Smerarlda strongly promoting the values of One Ocean Foundation.
MEDIA AND RACING COVERAGE
As with all Melges 32 events around the world, racing updates will be posted online at the Official Melges 32 Facebook Page. Tune in for the latest racing information, results, video interviews, and photos. Race reports, press releases and photos will be available online each day post-racing at melges32.com.
TOP FIVE RESULTS (PRELIMINARY - After Two Races)
1.) (RUS) Pavel Kuznetsov/Evgeny Neugodnikov, TAVATUY; 4-1 = 5
2.) (ITA) Matteo Balestrero/Branko Brcin, GIOGI; 2-4 = 6
3.) (ITA) Martin Rientjes/Gabrielle Benussi, CAIPIRINHA; 3-3 = 6
4.) (ITA) Edoardo Pavesio/Manu Weiller, FRA MARTINA; 6-5 = 11
5.) (ITA) Edoardo Lupi/Massimo Pessina/Lorenzo Bressani, TORPYONE; 5-6 = 11
Full Results