Melges 20 Russian Open All Set to Go in Cagliari, the Last Test Before 2018 World Championship on October 10-13 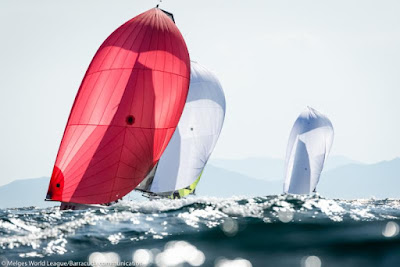 Cagliari, Italy (October 5, 2018) - In Cagliari, a fantastic thirty-five entries are beginning to breathe in 'World' class air as they prepare for this weekend's Russian Open, all in anticipation of the Melges 20 World Championship happening next week on October 10-13.
The Russian Open will serve as a decisive and insightful, competitive event, valid for accumulating points on the 2018 Melges 20 World League Ranking.
Racing is scheduled for the Russian Open on Saturday and Sunday, October 6-7 with all the best Melges 20 teams excited about the forthcoming Worlds. Week after next, top-notch World Championship racing continues with the Melges 32 on October 17-20.
Although the best Melges 20 teams in the world will be racing this weekend, they will not be so quick to reveal all their cards. Instead, they will work diligently to understand the balance of power within the fleet, and evaluate who the team to beat will be as the World Championship creeps closer.
The likes of defending World Champion Drew Freides aboard PACIFIC YANKEE, 2018 Melges World League, European Division Champ Filippo Pacinotti's BRONTOLO, top-ranked Vladimir Prosikhin at the helm of NIKA, multi-talented/multi-successful Igor Rytov's RUSSIAN BOGATYRSand Achille Onorato's MASCALZONE LATINO JR. are all in attendance.
The Melges World League is supported by Helly Hansen, Garmin Marine, North Sails, Toremar, Lavazza, Rigoni di Asiago and Melges Europe
Melges World League has signed and adopts the code of ethics of the Charta Smerarlda strongly promoting the values of One Ocean Foundation.