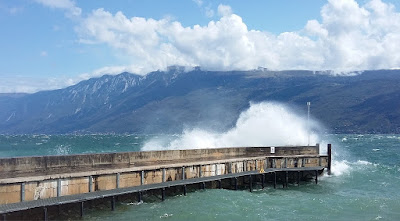 Gargnano, September 1st, 2018  - Not very typical Garda Lake conditions were the protagonist of the weekend of racing of the M32 catamarans in Gargnano.    After the no race of the first day due to the lack of wind, the fleet could only complete seven races yesterday, being then left ashore today for the heavy winds that were blowing on the Western shore of the Italian lake and choppy waters, with waves up to two meters.
There are then no news since yesterday for what concerns the ranking of the event, fifth act of the Cetilar Series - M32 European Series: with partial scores of 1-3-2-1-3-2-2, GAC Pindar by Ian Williams is the winner of the event with a margin of 3 points over the Swedish entry Vikings by Hakan Svensson.

Third step of the podium is for the Italian Andrea Lacorte on board his Vitamina Veloce with 19 points and Shark Team by Guido Maini closes the ranking in fourth position with 22 points.

The results of this event don’t change the leadership of the leaderboard for what concerns the circuit, where Vitamina Veloce keeps the control of the ranking. GAC Pindar follows in second place and Vikings by Hakan Svensson completes the provisional top three.

After the prize giving held in Circolo Vela Gargnano, the M32 crews may choose to compete in “Trofeo Gorla” that will be sailed tomorrow and in “Centomiglia”, iconic regattas that recall every year over hundred boats from all over the europe.

The next appointment with the Cetilar Sailing Series is scheduled for October, from the 11th to the 13th, in the Italian city of Trieste. The event will be a great preview of one of the most famous regattas of the World, the Barcolana of Trieste, that will be sailed on the 14th, and will be the key appointment to determine the winner of the 2018 M32 European Series.