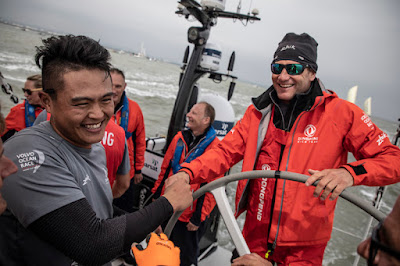 Charles Caudrelier and his team on Dongfeng showed why they are the top boat in the overall ranking in the Volvo Ocean Race 2017-18 with a display of faultless inshore racing off Cardiff this afternoon to win the Sky Ocean Rescue In-Port Race.


After a conservative start in light winds and against grey skies, the red and white Volvo Ocean 65 sponsored by Dongfeng Motor Corporation of China, was always in the hunt and on the trail of early leader Team AkzoNobel.
It was at the end of the second run to the downwind gate that Caudrelier pounced, swapping gybes with the Dutch boat and then emerging up the righthand side of the course where the tide was still favourable. Dongfeng had moved from being just behind to just ahead and she never let her advantage slip.
Mid-way up the final beat Caudrelier was able to tack on AkzoNobel on the lay-line and from then on the Dutch boat driven by Nicolai Sehested was always struggling. By the end, Dongfeng was clearly ahead with MAPFRE recovering to take a valuable second place (+49 seconds), with Team Brunel third (+1.13) and AkzoNobel back in fourth (+1.50).
This is Dongfeng Race Team’s fourth In-Port Race win of this campaign after victories in Cape Town, Hong Kong and Auckland, and it gives the mixed multinational male and female crew one more victory than the In-Port series leaders, MAPFRE.
Caudrelier was delighted with a performance which demonstrated excellent boatspeed in light winds and slick crew manoeuvres and that sets the team up perfectly for the start of the penultimate offshore leg from Cardiff to Gothenburg on Sunday.
“I am very happy,” said the Frenchman who is leading Dongfeng for the second consecutive Volvo Ocean Race. “It is always a pleasure to win an inshore race. With the tighter ranking, it is always good to keep Team Brunel far away from us and to come back on MAPFRE, but they again did a good fightback in this race.”

As Caudrelier alluded to, MAPFRE will remain the clear leader in the In-Port Series, something that could be decisive as a tie-breaker if, by the end the Volvo Ocean Race proper, MAPFRE and Dongfeng Race Team are tied on points.

“It is going to be difficult to gain seven points on them but who knows, you can finish last easily in this kind of race. But we are happy to win here today,” Caudrelier added. “This is one of our weaknesses compared to the offshore stuff. It is good for the team and it is good for the dynamic before the next leg.”

Dongfeng’s performance received plaudits from the skipper of the winner of the last Volvo Ocean Race, Ian Walker who watched this contest from the media helicopter. Walker has tipped Dongfeng Race Team to win this edition of the Volvo Ocean Race and he said the performance today was without mistakes and one where Dongfeng showed excellent lightwind speed compared to the opposition, once she had clear air.

In the In-Port Race rankings MAPFRE now has 56 points with Dongfeng on 49. Team Brunel has 41, with Team AkzoNobel in fourth place on 39 points.

The next action in the Volvo Ocean Race is the Leg 10 start at 16.00hrs local time off Cardiff – a 1,300 nautical mile stage to Sweden that Caudrelier and his team would dearly love to win.

Dongfeng Race Team is not only focused on trying to win the Volvo Ocean Race, it is also committed – as in the last campaign in 2014-15 - to helping to grow the sport of offshore sailing in China.