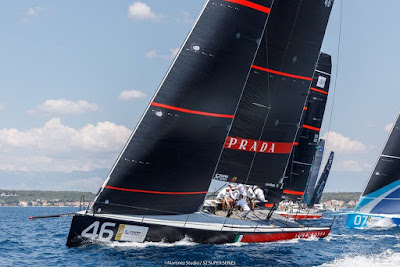 Zadar, Croatia, June 24 2018 – The TP52 Luna Rossa wins in the second series of races of the 52 Super Series circuit that counted the participation of eleven teams from eight different nations.    The Super Series regattas are the first tests for the new crew aboard Luna Rossa, Challenger of Record for the next edition of the America’s cup, while waiting for its new AC75 yacht.
Following the first stage in Šibenik the Italian team in Zara recorded excellent results and proved to be growing steadily and improving the fine-tuning of the boat, launched just last May in Trieste.
Despite the very limited time to test both the new TP and race strategies, team Luna Rossa was able to adapt quickly and went onto win the Zadar Royal Cup.
The week was characterized by unstable wind conditions with the crews forced to a stop on Friday due to the strong bora. The teams faced each other on the water in a total of eight races. It was a brilliant start for Luna Rossa who opened the week with a first and a second place, reconfirmed in closing the event in the seventh race, followed by another good result that allowed the team to win the second stage of this Croatian 52 Super Series event.
Skipper Max Sirena was satisfied:
"We finally reached the result we were aiming for. We had left Šibenik a bit angry because expectations are always high for us in Luna Rossa. In Zara we started the week well, with just a small set back on Saturday. Today we did well again and sailed with our head. I think it's an important day not only for us here in Croatia, but also for the team that supports us from our base in Cagliari. This victory is a strong motivation for them to push hard".
The same enthusiasm was expressed by tactician Vasco Vascotto: “For us it has been a fantastic week: we would like to share our joy with the rest of the team who can’t be on board but follows us closely from Cagliari. We want to dedicate this victory to them and to the shore team who has worked hard and well, allowing us the opportunity to go out on the water with a boat ready to win. It is an important milestone for Luna Rossa because sharing a joy together makes our team even stronger and closer".
The next 52 Super Series races will take place in the middle of July in Cascais, Portugal, before returning to the Mediterranean for the two final stages in Majorca and Valencia.