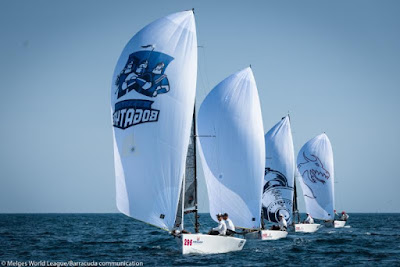 Lerici, Italy (June 22, 2018) - The third stage of the 2018 Melges 20 World League, European Division hosted by Circolo Vela Erix officially kicked off today with two races completed. Both races were held in light, but stable breeze that put a strain on the tacticians intuition and tested the ability of the drivers to grasp for the best wind on the course.
2017 Melges 20 World League Champion Igor Rytov at the helm of RUSSIAN BOGATYRS is officially in charge of the fleet with a marginable lead. He proved to have the best pace and overall speed of the day, which enabled him to dominate each race practically from start to finish. He took the bullet in Race One with Alexander Ezhkov's PIROGOVO in second, followed by Achille Onorato's MASCALZONE LATINO, JR. in third.
Race Two seemed to shake up the fleet a bit, as an initial general recall resulted in yet another 'uniform flag' start. The racing was tight and the winner was uncertain right up until the last few lengths to the finish line. In the end, it was Andrea Ferrari's SPIRIT OF NERINA for the win, followed by Rytov in second, and Vladimir Prosikhin's NIKA in third.
In the Corinthian Division, Russian colors fly high and proud as Alexander Mikhaylik's ALEX TEAM is in the lead, ahead of club sponsored entry ERIX A.
Racing continues on Saturday with the warning at 12.00.
The Melges World League is supported by Helly Hansen, Garmin Marine, North Sails, Toremar, Lavazza, and Melges Europe in collaboration with Lerici Coast, La Lince, Consorzio Nautico La Spezia, Motorvela, Cantieri Canaletti and Comune di Lerici.
Melges World League has signed and adopts the code of ethics of the Charta Smerarlda strongly promoting the values of One Ocean Foundation.
MEDIA AND RACING COVERAGE
As with other Melges 20 events around the world, racing updates will be posted online at the Official Melges 20 Facebook Page. Be sure to also follow the fleet on Instagram, Twitter and YouTube. Tune in for the latest racing information, results, video interviews and photos at melges20.com.
TOP FIVE RESULTS (PRELIMINARY - After Two Races)
1.) RUS - Igor Rytov, RUSSIAN BOGATYRS; 1-2 = 3
2.) ITA - Andrea Ferrari, SPIRIT OF NERINA; 6-1 = 7
3.) RUS - Pavel Grachev, MEDYZA; 4-6 = 10
4.) RUS - Alexander Ezhkov, PIROGOVO; 2-12 = 14
5.) ITA - Dario Levi, FREMITO D'ARJA; 10-4 = 14