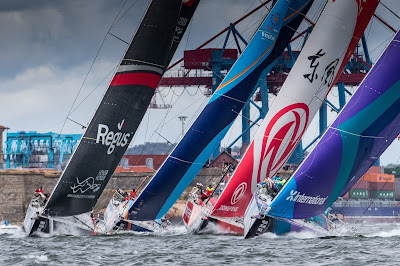 The red and white Volvo Ocean 65 carrying the hopes of China and sponsored by Dongfeng Motor Corporation, made an excellent start to the show-down final leg of the Volvo Ocean Race 2017-18 today off Gothenburg.     With skipper Charles Caudrelier at the helm, Dongfeng made a competitive start at the windward end of the line and quickly established herself in second place as the fleet began the all-or-nothing 1,000-nautical mile leg to the race finish at The Hague.

At the leeward end of the line the two boats that start this leg tied on points with Dongfeng – Team Brunel and MAPFRE – fought for space, with MAPFRE losing out and being squeezed outside the line. The Spanish crew under Xabi Fernandez was forced to turn around and come back, putting her in seventh place while Team Brunel were mid-fleet in fifth position.
Up ahead is a very technical leg beginning with a 100-mile beat up the Kattegat to the Norwegian coast, before the fleet turns for the run south to the turning mark off the Danish city of Aarhus. Then comes another beat back up the Danish coast before the final stages downwind towards The Hague.
Caudrelier admitted he was feeling nervous ahead of this leg, with the Volvo Ocean Race trophy so tantalisingly close, but he was looking forward to this final challenge.
“I am very excited to go for this leg, it looks very interesting and this is the kind of leg I really like,” he said as he left the dock in Gothenburg. “It is where I started to race 20 years ago in the Figaro in the same kind of leg, so I am happy to go and I am ready to go for a fight; it is going to be a big fight for sure.”
Caudrelier knows this will be a very demanding inshore race with all sorts of potential pitfalls. “I think it is going to be about everything we have learnt from the start. It is going to be about speed, about managing the transitions, making the right sail choices, but also making good tactical choices because it is all about the windshifts, light spots and then more wind. It is going to be a very complete test,” he said.
Dongfeng Race Team stalwart Carolijn Brouwer put it perfectly when she said that this leg – which takes her back to her home country - is the sort of moment that professional sailors “live for in this sport.”


Brouwer wants to win the Volvo Ocean Race but she also wants to win a leg, something that has eluded Dongfeng Race Team so far. “Of course the main goal is to be in front of the yellow boat and the other red boat in the fleet, but we haven’t won a leg in this race yet. We have been close very many times and for me it is also about going home to the Netherlands, so there is no better leg than the last one to finish first,” she said.


A final word from Caudrelier, reminding us that while one of the top-three crews will be in sporting heaven on Saturday, two more will be having to cope with aching disappointment of losing out after an eight-month battle around the world.


“Out of the three teams, only one will be happy and the two others will be very disappointed,” said the Frenchman. “We all believe we can do it, but I think if you want to have a nice winner then you have to have a nice second and a nice third. It will be amazing for the first place but there is no shame to be on the podium in this race I think. We did our best and I hope that the best will win.”