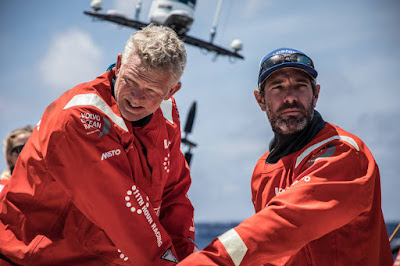 NEWPORT, USA - (8 May 2018) After over 5,000 nautical miles of racing from Itajaí, Brazil, the Volvo Ocean Race fleet experienced a complete restart in the early hours of Tuesday when, in the final approach into Narragansett Bay, the wind died and the distances between the top four boats decreased at one point to less than a mile.
“We knew it was going to be a close finish as soon as we left Brazil,” said skipper Charlie Enright on the dock after crossing the Inmarsat Finish Line at 759 EST (1059 UTC) just 15 minutes behind the top 2 finishers. “But to finish on a foggy morning at 6 AM, it was amazing to see how many people turned out. It’s great just to finish and great to be back on the podium.”

The Newport stopover is a homecoming for the blue boat with multiple connections to the Ocean State for the team and shore crew. Enright is from nearby Bristol, Rhode Island, boat captain Nick Dana is a Newport native, and team director and co-founder, Mark Towill, attended Brown University in Providence with Enright. Furthermore, team partner, 11th Hour Racing, is also headquartered in the historic sailing town.

“It’s special to sail into my home,” said Nick Dana. “Not many ocean races end here so it is amazing to see all the family, friends, and fans who came out on the water and down to Fort Adams on this foggy, cold spring morning to welcome us.”

“It’s great to be in Newport again,” Towill added. “We did some training here last year, so it feels like sailing home. The team at Sail Newport always put together an amazing stopover and we look forward to making the most of our stay here.”

Enright, Dana, and Towill may have the local connections, but the entire crew was looking forward to this particular arrival.

“I have heard so much about the Newport stopover,” said Jena Hansen, the Danish Olympic bronze medalist on her first Volvo Ocean Race. “Nick has told me all the places I must go to get some lobster rolls and local oysters this week.”

Looking back on the leg, British navigator Simon Fisher called it “all about the subtleties.”

“The transitions were the hardest part of this leg,” said Fisher.  “We sailed a little too high out the Doldrums, so we lost some gauge on the fleet. The last 200 miles were tough because we saw 40 knots of wind go down to nearly zero in a matter of a few hours. Coming into the Bay, we relied on our local knowledge onboard with Charlie and Nick and knew how to the play the current which I think definitely helped us get on the podium.”

Moreover, the USA is a strategic market for the co-title sponsor, Vestas. As well as hosting guests from the North American energy sector, the Danish leader in wind energy will also provide the team with key meteorological data ahead of the In-Port race and Leg 9 to Cardiff, Wales.

Now in Newport, the sailors and shore crew will be resting and preparing for the upcoming double-points transatlantic leg to Cardiff which starts on May 20. During the stopover, sailors will also be participating in the scheduled inshore racing, as well as a number of events including, the Ocean Summit, and a visit to a local marsh with non-profit “Save the Bay” to learn about their coastal restoration work, as part of 11th Hour Racing’s legacy project with the team..

Stay tuned to our website and social media channels for more information.