Volvo Ocean Race - Third in Cardiff, Dongfeng returns to the top of the leaderboard 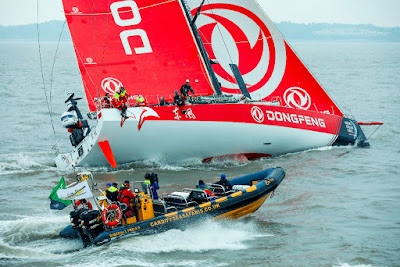 For Dongfeng Race Team it was a satisfying case of “mission accomplished” on Leg 9 of the 2017-18 Volvo Ocean Race from Newport to Cardiff, as they beat their main rivals MAPFRE and returned to the top of the leaderboard with just two legs to come.     But the team skippered by Charles Caudrelier of France and sponsored by the Chinese car and truck manufacturer Dongfeng Motor Corporation, still has its work cut out to convert its one-point lead over MAPFRE and a three-point margin over third-placed – and much-improved - Team Brunel into outright victory.

After reaching the Welsh capital in third place after eight-and-a-half days at sea and a thrilling transatlantic battle, Dongfeng Race Team now sits on 60 points with MAPFRE on 59 and Team Brunel on 57. However Dongfeng will earn one extra point at the finish in The Hague for the fastest elapsed time in the race and this could be decisive.

The Dongfeng navigator Pascal Bidegorry believes the crew now needs to pull off at least one leg win and as a result gain at least one more extra point in the remaining two legs, something Dongfeng Race Team has yet to achieve in this very close-fought eight-month contest.

“We have to win a leg because the extra point is really important now,” said Bidegorry on the dockside at the Volvo Ocean Race village in Cardiff. “We have to finish in front of MAPFRE and Team Brunel during the last two legs and for that we need to win – there it is,” he added.

His skipper and fellow Frenchman Charles Caudrelier was also sounding a cautious note, knowing that the battle for glory in this race is now a three-way affair. But Caudrelier’s smiling face said more than his words about the relief he was feeling after Dongfeng negotiated the light winds and strong adverse tidal conditions to hold onto her sixth podium finish in Wales.

“It’s nice (to be at the head of the leaderboard) and I am a bit relieved to come in here in third place, but we are only one point ahead of MAPFRE and there are just three points to Brunel, so it is two boats that we have to keep behind us now and not only one,” he said.

“So it’s going to be interesting to follow for people watching – the race is far from finished. The level of performance between the boats is very even and it’s a big fight for every place and it is much more difficult than at this stage in the last race,” Caudrelier added.

Dongfeng Race Team set sail from Newport still smarting form the disastrous finish to the previous leg there when the Chinese-flagged crew led with 15 miles to sail only to cross the line in fourth place after drifting in almost no wind. This time the goal was to attack and to regain the overall lead and this they achieved on a leg which saw some classic, record-breaking heavy weather racing.

Bidegorry says the team sailed a brilliant leg from America and at one stage fought well to come back on the MAPFRE and keep her behind. “I think the crew sailed very, very well to come back and to gain all the time,” he said. “It was a pleasure. Even at the end – we push and push - we know we have for the moment one point for leading on elapsed time and maybe at the end, this point is really important.”

Dutch sailor Carolijn Brouwer remembered the early stages when Dongfeng split to the north. “It has been a tough leg,” she said. “It happened very early in the leg where there was a split in the fleet and that was nerve-wracking for the first 48 hours, but luckily we had MAPFRE come with us.

“Team AkzoNobel and Brunel had a big lead on the fleet,” she added. “But we managed to come back well and we won our side of the fleet at least and managed to catch two boats on the other side which brought us to third and brings us back in the lead which is huge. But it is also difficult now with Brunel’s win.”

Chinese sailor Chen Jinhao – Horace – is always one to look on the bright side and he is confident his team can pull this off in the final few weeks of this Volvo Ocean Race.

“I believe we can do it,” he said. “Now we are the leaders and you can see that the top three boats are very close, so we know that the next two legs will be tough and important. We will try to rest where we can in this stopover and be ready to fight.”

Kevin Escoffier, meanwhile, is ready to take on the challenge of the final two legs, first from Cardiff to Gothenburg and then from Gothenburg to The Hague. “With Brunel winning this one it means that the finish will be quite stressful. The finish will be amazing. We would like to have a bit more points of the lead but it is what it is,” he said.

“The finish here wasn’t too bad. I am from St Malo so I am used to the tide and very strong currents. It is a very wide river, though, and when you have boats in the north and the south you are always afraid of that. It was stressful for four hours when we were in the light spot as we didn’t know what the other boats had. We knew the wind would come back and we would be OK though. MAPFRE was 30 miles behind Vestas 11th Hour Racing, so we knew it wouldn’t be like Newport.

This is Dongfeng Race Team’s second consecutive Volvo Ocean Race after finishing third overall in 2014-15. The team is committed to trying to win this edition and also to help promote and develop the sport of sailing in China.