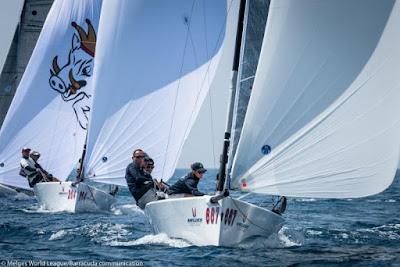 Marina di Scarlino, Italy (May 23, 2018) - It's only been a month since the first Melges 20 World League event in Forio d'Ischia took place and since, both Charleston, South Carolina and Sagamy Bay, Japan have awarded major trophies. This weekend, the Melges 20 returns to Scarlino, Italy to play out the second event of the 2018 European season.

Starting on Friday, May 25 thru Sunday, May 27, the Melges 20 fleet will be featured on the waters of Club Nautico Scarlino, the same exact stage in which the 2016 World Championship was held, and recognized as one of the most successful events in the history of the Class.
"We are delighted to welcome all Melges sailors back to Marina di Scarlino who, with all their services range from Resort Baia Scarlino, to offered spaces and logistics by Scarlino Yacht Service. The local shops, restaurants, pools and beach clubs look forward to offering the best reception to both the sailors and their families during the double Melges World League weekend," said Dott. Claudio Cilemmi, managing director of Marina di Scarlino. "The goal of the entire team at Marina di Scarlino, starting with Club Nautico Scarlino, is to bring the best racing experience to the crews, and that for our guests, the experience does not end with the competition between the buoys, but continues in every single moment of the day - on the quay after-racing and in all the events that make up an international regatta like this."
For the start of the Tuscan stage, the Melges 20 World League is expected to welcome over thirty teams representing seven nations - Russia, United States, Czech Republic, Sweden Monaco, Poland and Italy.
The Melges 20's appointment at Marina di Scarlino serves as a prelude to next week's Melges 32 Class bringing about several interesting points. The toughest competition can be expected, especially considering Filippo Pacinotti aboard BRONTOLO and his masterful and impressive performance in Forio. Because of this, surely every team feels as though Pacinotti has put them on notice, so they are working hard to refine their approach through diligent preparation, and of course, now is the time to make progress for the title of World Champion, which ultimately leads to the crowning of the next Melges 20 World League Champion.
All eyes are on America's, reigning World Champion Drew Freides at the helm of PACIFIC YANKEE, as well as current Melges 20 World League Ranking leader Vladimir Prosikhin sailing NIKA and fellow Russian competitor, 2018 European Champion Igor Rytov racing RUSSIAN BOGATYRS.
In addition to the aforementioned Pacinotti, the blue colors will once again be defended by Achille Onorato's MASCALZONE LATINO, JR., Manfredi Vianini Tolomei's MAOLCA, Carlo Alberini's CALVI NETWORK and Marco Franchini's MEZZALUNA just to name a few, in a Class that is open to many predictions.
The Corinthian Division is expected to be equally heated in a new duel between Italy and Russia - where Victor Novoselov's QUANTUM conquered the field in Forio.