Scandinavians win races, but Scott extends after fourth day for Finns in Palma 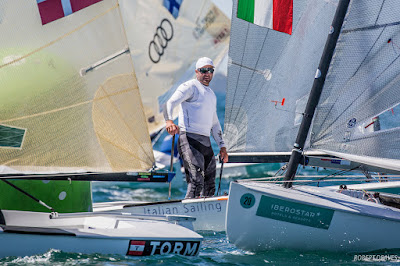 Though he has yet to win a race, consistency is paying off for Giles Scott as he takes a 37-point lead in the Finn fleet after the fourth day of the 49 Trofeo S.A.R. Princesa Sofía Iberostar in Palma. The Netherlands’ Nicholas Heiner is up to second while previous regatta leader, Nils Theuninck, from Switzerland, moves back up to third. The races wins on Thursday went to Norway’s Anders Pedersen and Sweden’s Max Salminen.

It was a typical Palma sea breeze day. With racing already put back to 12.00, the fleet were then held ashore before enough wind appeared to justify sending them out. The first race was started in very light wind that built throughout the day to peak at 14-15 knots in the second race.

Pedersen, the 2014 Junior world champion, led all the way in the first race to win from Scott and Facundo Olezza, from Argentina.
Pedersen explained, “It was still shifty, not big shifts, but it was hard. Taking a good start was the key today. Starting on the right side, and getting away.”
“The first race was very light, sitting on the traveller conditions, and the first upwind was a bit challenging and then there was a bit more breeze kicking in from the left on the second beat. That for sure helped me. I got a good start and got into the rhythm with the shifts and then just followed the fleet. It was quite easy.”
“In the second race it got more windy during the race. The boat end was favoured and a lot of us got pushed over the layline and lost quite a few metres.”
He is struggling with an arm injury since the Europeans two weeks ago. “’I have been trying to recover from that since then, so I am struggling with that when it’s windy, but it’s good to see that I am improving my light wind sailing.”

The next race was sailed in a building breeze, which topped out at 14-15 knots. While world Champion, Salminen, led at the top, France’s Jonathan Lobert got through downwind, but then rounded the unfavoured gate mark. Salminen rounded the opposite mark and led back up the second beat to take the win from Lobert and Heiner.
Salminen said, “I am slowly working myself back into the regatta. I’ve been making a lot of stupid mistakes, but maybe today my speed was my friend, as I don’t know if I sailed that well.”
“We’ve have had quite short courses for this many boats and in this light stuff everyone goes almost the same speed, so it’s really important to find a good lane and work your speed out of there. And then downwind the same, when everyone arrives at the top mark at the same time it’s really had to find that little extra.”
Today, “I had a solid start and then found some really good lanes where I could work my speed. And then downwind, I am quite fast in these choppy sea breeze waves.”
With a fourth and a second, Lobert had the best score of the day and moved up to sixth overall.

A 6, 3 for Heiner was enough to move from tenth to second overall.
On today’s racing, “I played it pretty safe to get off the line, with quite low risk sailing and I made a few nice decisions to sail forward and was quite happy with that. In the second race the breeze filled in and out of the line we were really hiking and the waves were picking up and it was a beautiful race. I was happy to be in the front bunch and fighting it out with four guys.”
On the gap of 37-points to Scott. “Giles is annoying, he is always there. Nah, he sailed really well, but he’s catchable. I just need to be as consistent as him and I still have two years to do that. We need to hurry up though.”
Noting that Scott has not won a race here yet, Heiner adds, "I don’t think here you need to win races, especially in the first two days, if you can put down four top tens in the first two days that does the job. He has a pretty nice exit going into the last two days. He is sailing really well…but he's catchable, hopefully. We’ll work on that."

After leading the regatta following the second day, Theuninck is back up to third after a 12, 7 today.
“I think it’s quite solid results in a strong fleet like this.”

“I was a bit disappointed after yesterday. In the strong conditions I was not so well prepared for it, but today was much better, even in the second race when the breeze got stronger. I had some good downwinds, and some good speed on the upwinds, so I am really happy with the day.”
He added that he felt slightly awed looking at the results list, with his name surrounded by so many famous names of world, European, Olympic and America’s Cup champions. But the Finn is providing a perfect pathway for him to realise his potential and he is making the most of the opportunity.
This is his first full season in the Finn class. "I sailed Laser for five years. And I stopped in my last junior year, where I was third in the U21 Europeans. I think the Finn fits me much better and I am able to sail my best.”

With one more day to sail to decide the top ten to go into Saturday’s medal race, the field is beginning to tighten. While Scott seems to be running away with it, there are just 13-points from second to tenth, and all of those are already discarding high points, so one more mistake from any of them could prove costly.
The final races in the opening series for Finns in Palma are scheduled to begin on Friday at 11.00 before Saturday’s medal race.
Results after eight races
1  GBR 41 Giles Scott 33
2  NED 89 Nicholas Heiner 70
3  SUI 1 Nils Theuninck 72
4  ARG 48 Facundo Olezza 74
5  NZL 61 Andy Maloney 76
6  FRA 112 Jonathan Lobert 77
7  SWE 33 Max Salminen 81
8  ESP 7 Alejajndro Muscat 82
9  NOR 1 Anders Pedersen 83
10  BRA 109 Jorge Zarif 83