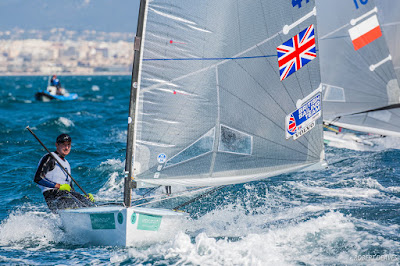 Giles Scott, from Britain, took a 20-point lead at the 49 Trofeo S.A.R. Princesa Sofía Iberostar in Palma on Wednesday after two finntastic races in 18-24 knots from the west, with perfect waves and brilliant sunshine. It doesn’t get much better. Finland’s Tapio Nirkko is now up to second on equal points with Italy’s Alessio Spadoni in third. The race wins went to Australia’s Oliver Tweddell and New Zealand’s Andy Maloney.

Wednesday was always promised to be the best day of the week in Palma and it certainly delivered with perfect sailing conditions that stretched and challenged the fleet while providing some fantastic racing. The breeze built during the morning and by race time was passing 20 knots and starting to push some nice waves down the bay.

Tweddell has not had the best series so far but has turned it around in the last three races to move up to 16th overall. He controlled the first race of the day from the top mark, enjoying the breeze and the waves.
“This is more traditionally what we are used to here with big winds and big waves, so it’s nice for us all to get out there and have some proper Finn sailing with free pumping, and swinging it round it downwind and hurting the legs and just going hard downwind, so that was pretty nice to do.”
He continued, “So it was nice today to get out into some conditions that we have spent a lot of time training in, in Australia. To be fair we have not done much in under 10 knots, so the last few days were pretty horrendous for me, and I think for the rest of the team as well, so today we were able to stretch our legs today.”
He also revealed he wasn’t feeling his best. “I am pretty sick at the moment, and I only flew in from my sister’s wedding the day before the regatta started so I am taking it one race at a time, trying to learn stuff. I am happy with today and looking forward to tomorrow to try and improve on some lighter stuff.”
On his progress, “I feel like I have made progress in certain areas but also have dropped back in others, so I need to take a more holistic approach to how we can bring that all together without sacrificing certain areas. I have dropped off significantly in light winds, which used to be my strength, and I am going better in the medium and strong winds, so if I can bring that light air performance back, even a bit to get some respectable results, then I might just start changing the overall scoreboard.”
He was followed over the finish by Nicholas Heiner, from The Netherlands, and Scott.

The second race of the day went to America’s Cup winning sailor, Andy Maloney. It was his first race win in a big Finn fleet. Britain’s Ben Cornish took second, with Australia’s Jake Lilley in third.
Maloney, who is now in fourth overall, explained, “I had a good start mid line underneath the pack at the boat end and had good pace off the line. I managed to punch out and then the breeze went 10-15 degrees left, so I tacked in a nice line of pressure and managed to go low and fast over the fleet and get to the layline and rounded the top mark in second behind Jake Lilley. Sailed the run quite nicely. There was a little bit of skew on the course so just sneaked ahead downwind and sailed a pretty nice second beat and held on from there.”
Training with fellow AC sailor, Josh Junior, the pair feel they are making good progress. “Josh and I were not too happy with how we were going at the Europeans. We’ve managed to make a few changes this week and we are going a lot nicer. But we are learning heaps and I am lucky to have Josh to make the process a bit quicker.”
But today, “I was going pretty nicely upwind. I just kept it simple and stayed out of the traffic as much as I could.”

After placing 10th and 16th today, Nirkko was quite surprised to find himself in second overall.
“It’s a very high point regatta, except for Giles, so I think a good average at the end of the week will be important.”

“I had a good start to the week, a good first day and then yesterday I was able to keep up with the light and tricky conditions, but got a black flag in the second, so the pressure is on to deliver a good result. Today the conditions were very different and really nice to get the big waves. I had good starts in both races. In the first race I kept up with the front pack, so that was a decent, quite conservative race, but in the second I started near the committee and with a couple of others pretty much hit the right corner which was a disaster, and then it was about recovering the rest of the race.”


Scott followed his third place with a sixth after also choosing the wrong side in the second race.
“The second one was quite tricky. Everyone on the left was coming in real strong. The first one was so strongly right and then on the first beat in the second one there were a few of us just heads down heading out right again, and when we tacked back we saw that we were not where we expected to be.”
On the conditions, “It was hard sailing and I think a lot of people were caught out with settings as well. The breeze came in so quickly before the first race I imagine a lot of people were caught out. I know I was. Within about five minutes it had jumped from 10 to 20 knots.”
But like all the sailors, he enjoyed the conditions. “Good old Palma, delivering today. It was good.” But, “I think tomorrow is going to be another tricky one. It’s going to be wishy-washy light sea breezes by all accounts, but we are on schedule.”
And with the perfect mindset of a Finn sailor, “And what time is it? Before 2.00 o’clock and we are back in the harbour for lunch.”
Racing for Finns in Palma is scheduled to continue on Thursday at 12.00.
Results after six races
1  GBR 41 Giles Scott 26
2  FIN 218 Tapio Nirkko 46
3  ITA 59 Alessio Spadoni 46
4  NZL 61 Andy Maloney 49
5  SUI 1 Nils Theuninck 53
6  NOR 1 Anders Pedersen 53
7  ESP 7 Alejajndro Muscat 54
8  FRA 17 Fabian Pic 56
9  USA 91 Luke Muller 56
10  NED 89 Nicholas Heiner 61