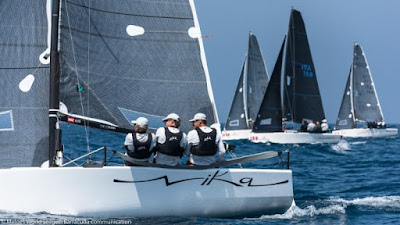 Forio d'Ischia, Italy (April 22, 2018) - The first event of the 2018 Melges 20 World League, European Division is now complete and rounds of congratulations go to the strong colors of Italy's Filippo Pacinotti helming BRONTOLO with tactician Manu Weiller, and crew members Federico Michetti and Leonor Ramia. On the Forio d'Ischia race course, Pacinotti showed top performance, in particular, he captured three out of six possible race wins. Mathematically, the award and victory was his before the last race even started.

"It was a great regatta and a perfect result. In so many ways it was very unexpected, considering I have not had much success racing the Melges 20, which I've only sailed sporadically," said Pacinotti. "Here in Forio, we really guessed everything from the set-up, to the tactics, but we are very aware that this will not always be the case. The season is long. For us as a team, the important focus will be on those events that take place in September and October."

"Being here in front of everyone makes this victory an emotional one, because this was built from afar, fighting for many years in the Melges 32 Class. Being back in the big Melges family and competing in the Melges World League, with a result like this, fills us with great happiness."
Behind Pacinotti, whose success is attributed to superior speed over the competition in light to average wind conditions on the final two days in Forio d'Ischia - it was without a doubt a real battle with continuous jostling of positions.
The final podium included Vladimir Prosikhin at the helm of NIKA (Michele Ivaldi, tactician) in second place, with third going to Rob Wilber's CINGHIALE (Charlie McKee, tactician). Completing the top five respectively included Achille Onorato's MASCALZONE LATINO JR. and Alexandr Ezhkov's PIROGOVO SAILING.
Russia's Victor Novoselov aboard QUANTUM becomes the first European Corinthian Melges 20 Champion of 2018 (finished fifteenth overall).  The 2018 Melges 20 World League moves on to the Tuscan regatta race course at Marina di Scarlino on May 25-27.
The Melges World League is supported by Helly Hansen, Toremar, North Sails, Garmin Marine and Lavazza. We are also thankful for the support of our local partners Alilauro, Medmar, Nastro Azzurro, Costanzo, Cenatiempo.   Melges World League has signed and adopts the code of ethics of the Charta Smerarlda strongly promoting the values of One Ocean Foundation.
TOP FIVE RESULTS (FINAL - After Six Races, One Discard)
1.) (ITA) Filippo Pacinotti/Manu Weiller, BRONTOLO; 1-2-[3]-1-1-3 = 8
2.) (RUS) Vladimir Prosikin/Michele Ivaldi, NIKA; 2-7-[10]-4-6-1 = 20
3.) (GBR) Rob Wilber/Charlie McKee, CINGHIALE; 4-[9]-6-3-3-7 = 23
4.) (ITA) Achille Onorato/Malcolm Page, MASCALZONE LATINO, JR.; 10-10-1-5-5-[27] = 31
5.) (RUS) Alexandr Ezhkov/Danil Odincov, PIROGOVO SAILING; [24]-11-8-8-2-6 = 35
Full Results