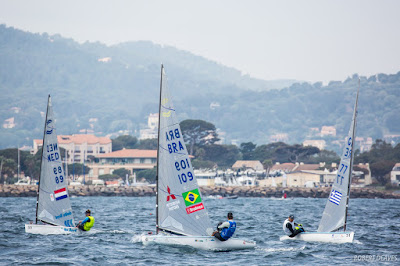 In some of the best racing conditions of the week, Brazil’s Jorge Zarif stormed the medal race with a huge victory to snatch gold out of the hands of Nicholas Heiner, from the Netherlands. Turkey’s Alican Kaynar took the bronze.   In 12-15 knots of breeze the medal race provided a great spectacle for the final showdown. However, the race was over as soon as it began for fourth placed Ondrej Teply, from Czech Republic, who was pulled out as an early starter.
Zarif thought he saw better pressure on the left and crossed over. Heiner let him go and chose to stay with the group on the left. The wind then switched to the right and when the groups crossed near the top, Zarif already had a large lead. Heiner rounded near the back and never really caught up. Zarif cruised round the course to take the gold. For a while Kaynar had a chance for silver, but couldn’t put enough boats between him and Heiner, eventually crossing sixth and seventh.Sweden's Max Salminen crossed in second, after going back at the start, while Ioannis Mitakis from Greece was third.Alican Kaynar won this event last year after a medal race match race with Heiner. The roles were reversed this week with Kaynar playing catch up after a bumpy start to the week.“It was really tight before the start with close points, and after the start I was close with Nicholas and Ondrej, who had a chance for medal, and Jorge just escaped to the right side, so I couldn’t cover everyone. So I stuck with the guys close to me.”

“I had some chance to attack for the second place, but Nicholas had a good downwind on the last one and he managed to keep the distance between us. I tried to pass two boats on the downwind, but I couldn’t get past.”On the medal, “It’s very good and my second medal this year after Miami so I am quite happy with how the season is going.”

Heiner has arguably been the best sailor this week, winning four of the shortened eight race opening series and always being a threat. His inconsistent scoreline in the other races perhaps best indicated the tough conditions the fleet has faced this week with generally very light and patchy winds. Six out of eight opening series races were sailed in less than 9 knots.While content with his general performance he was unhappy at again losing out in the medal race.“That was a tough one..another silver. I was pretty happy where I was out of the start. When Jorge tacked off it looked pretty dead and I was on quite high numbers and I quite liked what I saw on the left. A few other guys ducked me and I thought I maybe needed to go with them, but I was trusting my numbers and what I saw on the left, but then it went 15-20 degrees right and it never came back. It was a harsh one.”

“In the end, during a medal race it’s what you see and what you get, though apparently I didn’t see the right thing. On the last day you need to be the best and today, I wasn’t.”He was happy with a medal, but referring to the runner’s up blue shirt. “Maybe we just need to finish it off the day before the medal race. I think it’s been a good week and I won half the races, but in the other half we finished about 10th, so I need to step it up a little bit there. It’s enough to work on and it’s great we have three medals, but I am kind of over the blue.”
Jorge Zarif has sailed an amazing week here and had a great shot at winning the gold. He turned that opportunity into reality for his first European World Cup gold medal.“I talked to the Laser guys before the race and everyone said that the left was paying a little bit, but the forecast was saying the wind would turn to the right, and just before the start I saw a little bit of pressure coming from the right. I didn’t think it would be so much but I tried to start by the boat and tacked to the right and it worked really well.”“Jake [Lilley] tacked to the right early and I saw he was in more pressure so I thought it was time to go over there as well. It was better than I thought it would be.”