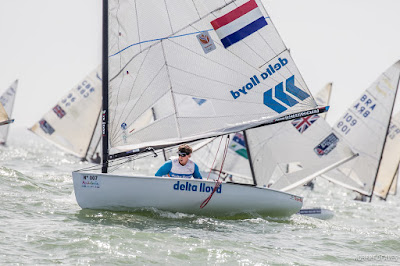 After another light wind day at the Open and U23 Finn European Championship in Cadiz, Nicholas Heiner, from The Netherlands, continues to hold the overall lead from Brit, Ed Wright, and Facundo Olezza, from Argentina. It was a high scoring day for many, with race wins going to Wright and current world champion, Max Salminen, of Sweden.


Three races were scheduled to try and catch up with the programme, but the light conditions meant the race team only inflicted two on the fleet before calling it a day. It was painful for some, but gave chances to a lot of sailors to make a name for themselves at the front. And many took advantage of that.
The previous forecast of strong winds disappeared overnight to leave a slightly flatter sea than Monday, and a grey and wet sky. A large cloudbank rolling down the course in Race 2 of the championship shuffled the fleet and left those on the right with a nice lead at the top.

In his first Finn event, Panagiotis Iordanou, from Cyprus, led round the top mark from Wetherell and Phillip Kasuske, of Germany. Wright led through the gate, and pulled away upwind with Nils Theuninck, of Switzwerland, coming through to second. Nothing changed upwind, but on the final downwind, current U23 World Champion, Oskari Muhonen, from Finland, came through for second with Theuninck, in third.
By now the rain clouds had dispersed, leaving something resembling warmth coming down through the thin cloud. It took three attempts to get the fleet away for Race 3 with seven boats pulled out on two black flag starts. Salminen led round the top and was never in much danger of losing his lead, while Heiner and Deniss Karpak, from Estonia, changed places several times, but moved clear of the fleet. Heiner eventually crossed second with Karpak third.

Wright, “We had a pretty good day, but a very difficult day. Not much wind, it was very patchy out there and that was kind of the main thing. My objective was just to stay in the pressure, and it seemed to be all right in the end, as I won the first race and just hung on in the second race. Hopefully we will get some wind for the rest of the week.”
On the size and depth of the fleet, “It’s really impressive and everyone is going fast, and unfortunately everyone is going high, so it’s very difficult to compete against these guys.”
“It was going to be offshore, so would have been quite shifty and tactical as well. Unfortunately we had the light day to maybe we’ll get it tomorrow.”

Salminen, ended the day in eighth overall, “Tricky first race when I couldn’t get enough right to make the raincloud, but fought my way back from that. The second race, I had a good start in the middle and pretty much led all the way round from there.”
On the sailing conditions, “A lot of this is technique in this big swell, that we had from the windy days before, which I have gotten good at after so much time in Rio. I think that is paying back now.”
Like Wright, he spent much of the winter training and competing in Australia. “The training in Australia was really good. With this championship being earlier than usual, I wanted to keep my racing brains switched off over the winter, so that’s why I did Miami as well, but I don’t now if I have succeeded 100 per cent, but it’s better than most years.”
On the windy days forecast, “That’s what we’ve had leading up to this regatta and I feel really good, so I am looking forward to test myself.”
On the quality fleet, “Many very good sailors have come back from the America’s Cup teams, so we are almost a full house here, with a lot of non-Europeans as well, so for sure the fleet is really, really good.”

All top three U23 sailors are in the top seven overall. A stellar day from Nils Theuninck, from Switzerland, in his first Finn Europeans, moves him up from 33rd to fourth, and third European. Defending U23 European Champion, Henry Wetherell, from Britain had a mixed day to move up to fifth, while Ondrej Teply, from Czech Republic, moves up three places but drops to third in the U23 rankings.
Theuninck, “I had a pretty good day so I am really happy to move up the leader board today. But there is still four more days to go.”