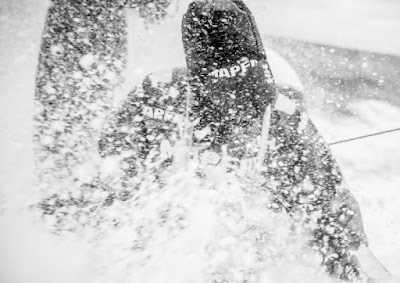 Conditions are fast, wet and wild for the Volvo Ocean Race fleet on Sunday as they charge to the southeast, finally heading in a direction where miles sailed translate into miles towards the finish in New Zealand, still more than 4,000 nautical miles away.

With the passage of a front, the wind has shifted to the north and the boats are on a tight reach in 18 to 25 knots of wind, making 20 to 25 knots of boatspeed. It’s not comfortable. But it’s fast.
“Since the front hit it’s been pretty full on,” said Blair Tuke from on board MAPFRE. “To start with it was about as good sailing as you can get, 20 to 25 knots of breeze and flat, flat water. But over the last few hours, things have just got gradually a little bit worse. Sea state and water on deck, it’s probably the most water I’ve ever seen.”
“This is a great way to gain some miles after some slow upwind sailing that we have been doing,” agreed Dee Caffari from Turn the Tide on Plastic.
"There is water pouring down the deck, everyone is wet, everything is wet inside and out but no one is complaining as we all know this is short lived and we will cover some serious miles while we are at it. And the water is warm, 19 degrees, matching the air temperature.”
The fleet is still largely in two groups, with MAPFRE holding the narrowest of leads over Team Brunel and Dongfeng Race Team, and Turn the Tide on Plastic is just 13 miles behind.
The second group had consisted of team AkzoNobel and Scallywag, but their paths are beginning to diverge, with Scallywag charting a southern route and cutting the corner. It was a strategy that worked on Leg 4… we’ll see over the coming hours if it is successful again.