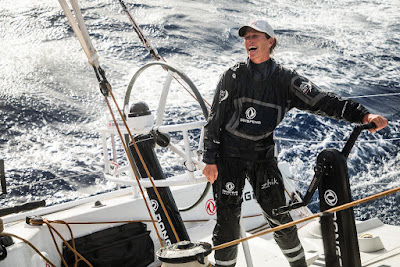 On their 13th day at sea in the 6,100-nautical mile Leg 6 of the Volvo Ocean Race 2017-18, the men and women of Dongfeng Race Team are in good spirits and fighting to keep the Spanish crew on MAPFRE behind them.   The two boats are fifth and sixth in the fleet ranking out of six right now but that is almost irrelevant. They are at the back of the fleet on this leg, but on the overall scoreboard they are first (MAPFRE), and second (Dongfeng) and separated by just four points.

Thus, even if they finish at the back of the fleet this time, the crucial thing is who gets in first and Dongfeng Race Team, sponsored by the Chinese car and truck manufacturer Dongfeng Motor Corporation, are doing their utmost to ensure they get to New Zealand in front.

This has been a tough leg with a rough opening few days and then the lottery of the Doldrums at the Equator in the western Pacific Ocean where both Dongfeng and MAPFRE slipped back to over 200 miles behind the leaders. Now they have been catching up as the fleet enters the so-called “second Doldrums” (the South Pacific Convergence Zone) and are 75 miles behind.

But it is all about what is developing into a global match race against MAPFRE for overall honours in this Volvo Ocean Race. The battle between the two red boats is beginning to resemble the nautical equivalent of a classic heavy-weight boxing match as they two crews fight each other to a standstill on every leg.

In the latest position report the two boats were just .3 of a mile apart and in sight of each other, with Dongfeng just ahead, in terms of distance to the finish and with a lateral separation of just 1.5 miles. In his latest blog from on board, Xabi Fernandez, the MAPFRE skipper, said he felt like he had been in a two-boat testing session with Dongfeng over the last few days.


The Dongfeng skipper Charles Caudrelier, meanwhile, summed up the mood on board the red and white Volvo Ocean 65. “We are last with MAPFRE – that’s usual,” said the Frenchman with a big smile. “But our spirit is still good and the leg is still very long. If our moral was poor I think that we would have a very tough time in the next few days.
“It’s very, very complicated (ahead), but there is still hope and we have to keep this hope and stay positive,” Caudrelier added.
Dutch sailor Carolijn Brouwer, who has completed every leg without a break in the race so far, is happy that the boat has been moving again and catching the leaders, Sun Hung Kai Scallywag skippered by Dave Witt and second-placed Team AkzoNobel skippered by Simeon Tienpont.
“Yeah right now we are sailing in some more clear patches,” said the 44-year-old whose six-year-old son will be waiting to greet her in Auckland. “The rain is behind us and we have about 15 knots. It’s quite nice, just a little bit unstable, but we are travelling in the right direction now, so life is good!”
Ahead of the crews at the moment is a huge area of light wind to the east and northeast of Australia and there looks to be no clear way through. Marcel van Triest, the Dongfeng Race Team meteorologist, believes this could present opportunities for the boats at the back like Dongfeng.
“The second Doldrums will be huge as, in the wake of Tropical Cyclone Gita, the weather is all pretty disturbed,” said Van Triest. “Only when the crews clear the latitude of Vanuatu will we start to see some certainty in the routing towards the finish. And there are quite a few indications that extreme routes might work, so we could see some big separations in the fleet.”
So now it is all about trying to tease as much boatspeed out of light and variable winds as possible and trying to avoid clouds and thunderstorm cells that can stall a boat for hours. The humidity is up and there is plenty of rain around, making the boats wet inside and out.
This may not be heavy weather sailing in the Southern Ocean but this section of the Volvo Ocean Race is certainly proving a tough test both mentally and physically.