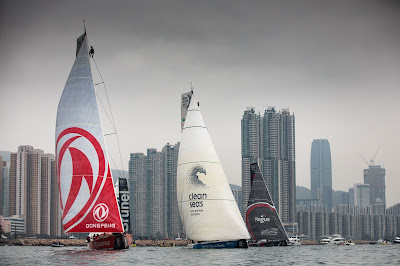 The Chinese entry Dongfeng Race Team has taken the lead in the Volvo Ocean Race 2017-18 In-Port Race series for the first time today after two strong performances in Hong Kong.  Following its second place finish in the HGC In-Port Race on Saturday, the crew skippered by Charles Caudrelier of France followed up today with another strong second place in the Round Hong Kong Island Race.

The two results, which are amalgamated to count as one In-Port Race score, leaves the crew sponsored by the Chinese car and truck manufacturer Dongfeng Motor Corporation, tied on 25 points with MAPFRE, at the top of the In-Port Race series overall.

However Dongfeng Race Team is now deemed the overall leader as a result of having beaten the Spanish team – which won today and was fourth yesterday - over the two races in Hong Kong.

"It was a very good result for us,” said Caudrelier after today’s race. “We are in the same position as the MAPFRE crew which is full of inshore specialists, so I think we can be proud of the team’s performance.

“We had very tricky conditions today but we had some good advice from local sailors and it helped us a lot. So I think we prepared it very well and the result is there, so that’s good.”

Chinese Dongfeng crew member Chen Jinhao, also known as Horace, was delighted to win overall in Hong Kong in front of his home supporters on a round the island course he knows well.

“It is an amazing decision to have a race around Hong Kong as part of the Volvo Ocean Race,” he said. “It is a beautiful place for sailing and every year we do this race so it was great to sail it today on Dongfeng.

“We were second today but overall in the In-Port Races here we are the winner and we are leading the ranking overall, so that is very positive for us,” he added.