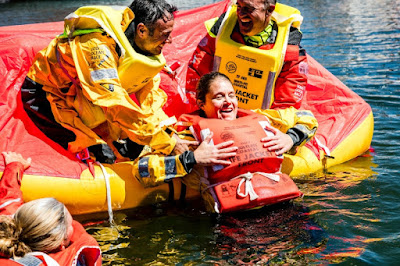 The leaders of the Volvo Ocean Race, MAPFRE, will make no changes to the crew that won Leg 3, as they prepare to race from Melbourne to Hong Kong when Leg 4 starts on Tuesday January 2.   It’s a much different story elsewhere in the fleet where significant swaps are taking place. Some are scheduled rotations, while others have been forced by injury or for other reasons.

In total, 19 sailors are rotating on board for Leg 4, with 18 coming off (SHK/Scallywag is racing with one additional crew for this leg). A dozen will be seeing their first action of this edition of the Volvo Ocean Race and several had to complete a survival at sea refresher course on site in Melbourne.
The two teams sitting on equal points behind MAPFRE, Dongfeng Race Team and Vestas 11th Hour Racing, for example, will each be making notable changes.
Vestas 11th Hour Racing skipper Charlie Enright will miss Leg 4 as he and his family deal with an on-going medical situation. Enright plans to re-join the team in Hong Kong while Mark Towill has been nominated as skipper for the leg.
“The depth and solidarity of our team is what's allowing me to take some time away to focus on my family. I think this is a real testament to what Mark and I have been able to put together," said Enright from back home in Rhode Island, USA.
"I know that under the leadership of Mark and navigator Simon Fisher, the team is in good hands, and I look forward to getting back with the group in Hong Kong.”
Phil Harmer and Hannah Diamond will return to the Vestas 11th Hour Racing crew for Leg 4, while Jena Hansen rotates off the boat.
Dongfeng Race Team is replacing injured navigator Pascal Bidégorry with previous Volvo Ocean Race winning skipper and America’s Cup skipper Franck Cammas.
“Franck is joining the crew because of Pascal’s injury, which is not good news for us because Pascal has been a key element of the team since the beginning,” said skipper Charles Caudrelier. “Franck was available and he was ready as a back-up – we had already spoken about his wish to participate if he could help.”
Daryl Wislang also returns to the team while Justine Mettraux sails her first leg on board and Chen (Horace) Jinhau rotates into the crew.
On the fourth-placed Team Brunel, four of nine sailors will be swapped out.
Rome Kirby (USA) and Sam Newton (AUS) join the team, in addition to race veteran and match race champion Sally Barkow (USA) who is replacing the injured Annie Lush, and the Danish sailor Jens Dolmer, who has sailed with skipper Bouwe Bekking on many of his campaigns. This foursome will replace Louis Balcaen, Annie Lush, Alberto Bolzan and Peter Burling.
On fifth-placed Sun Hung Kai/Scallywag, Libby Greenhalgh joins the team as navigator, replacing the injured Antonio Fontes, and Australian yachting legend Grant Wharington joins the team for the first time, along with rookie Trystan Seal. This will be the first leg Scallywag races with nine sailors on board.
Team AkzoNobel will have had the shortest time ashore, having only finished Leg 3 on January 27. But skipper Simeon Tienpont is confident his team is ready to get back to work.
Rotating back on board are Peter van Niekerk and Luke Molloy, who are in for Alex Pella and Justin Ferris. And Emily Nagel will take this leg off, replaced by Cécile Laguette.
Dee Caffari’s Turn the Tide on Plastic will have veteran navigator Brain Thompson on board for the first time, as Nico Lunven takes a well-deserved break. Annalise Murphy returns for Bianca Cook and Bernardo Freitas rotates on board for Lucas Chapman.

Turn the Tide on Plastic