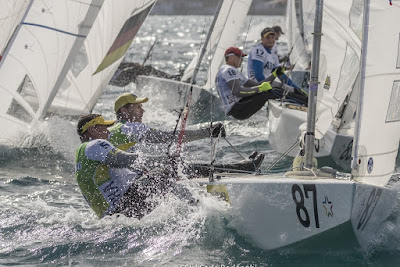 On the first beat of race one, the boats on the left looked good including old US handsPaul Cayard/Phil Trinter and Mark Mendelblatt/Brian Fatih, but also invited VIPs like double Moth World Champion Paul Goodison sailing with German Star legend Frithjof Kleen. At the top mark defending champions Mendelblatt/Fatih shows some of their old magic pulling out a solid five boatlength lead with Goodison/Kleen sneaking ahead of Cayard/Trinter to round second. But on the runs, experience paid: Mendelblatt/Fatih held position claiming the first race, while Brazilian Olympic legend Robert Scheidt and Henry Boening outsailed Goodison/Kleen, relieving them of second coming into the line.

"I know Goodie from our Laser days - I think he has got a good set up and a good crew and a good boat," observed Scheidt. He added that with invited sailors such as his old British rival the line-up here is the toughest to date.

Mendelblatt/Fatih were also showing great pace, finishing comfortably ahead of the chasing pack. "It was pretty good downwind - better than in years past," said Mendelblatt. "It was unlimited rocking and pumping today. Some guys go really hard and other go smoother. We are one of the smoother teams. Some of the big Finns guys can put a lot into it."

In the second race, the left also paid on the first beat with Goodison/Kleen putting in another great performance, squeeze in from the port layline at the top mark just inside of Xavier Rohart and his London 2012 crew Pierre-Alexis Ponsot with Poles Mateusz Kusznierewicz/Dominik Zycki third.

On the first run, the French held on starboard gybe and took the lead coming into the leeward gate with Mendelblatt/Fatih also rolling past Goodison/Kleen. Rohart/Ponsot kept their noses clean for the rest of the race which was not the case for many other, including the likes of Mendelblatt/Fatih and reigning Star World Champion, Norway's Eivind Melleby, sailing here with the USA's Joshua Revkin all of whom infringed at the top mark and had to carry out penalty turns. Ultimately the Poles claimed third with Scheidt/Boening managing second to finish the opening dayleading overall by a point from Kusznierewicz/Zycki, but with just three points separating the top five.

"It was a match - we took the right decision to stay outside at the top mark," said race two winning crew Pierre-Alexis Ponsot . "Then it was about finding a good space with the waves for the oouching and pumping. Upwind it was hard because it is very choppy so we had to hike very much."

Coming off the water with the biggest grin was definitely Goodison. "They have all been sailing for years and I have only down 10 days total," he said of the competition. Of rediscovering long lost muscle groups after his first ever Star races, he added: "It is almost like the old Laser days when you were a bit out of practice and not quite fit enough at the beginning of the year. It is amazing to be out there racing with all these guys. I was very worried coming into this that we would be way off the pace. I am very fortunate that this is Frida's boat (Kleen) and he has a good feel for the numbers. I do a little bit of the 'feel' stuff and he does general set-up. Downwind it is very much like sailing a Laser - just the rocking and steering, only I'm not as strong as some of the big guys and can't pump as hard."

And this was after an easy two race day. Tomorrow four races are scheduled.

Full coverage of all five days of action will be streamed live on the internet with expert commentary from special studio guests, including America's Cup four time winner Dennis Conner and double Olympic champion Shirley Robertson. On the water, the latest in hi-tech camera technology, as well as Virtual Eye 3D Graphics, will provide thrilling viewing.