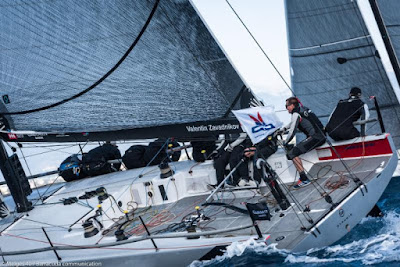 Racing commenced under premium conditions. Fifteen to seventeen knots of breeze greeted the fleet for the opening heat, which diminished as each race progressed swinging from 300-330 degrees. And yet again, there was great balance within the fleet awarding three different winners.

Alessandro Rombelli's STIG with tactician Francesco Bruni has dominated almost every Melges 40 Grand Prix race held, but what is most impressive is that this very skilled team clearly marches to the beat of their own drum. A strong start in Race One gave way to a win, but the struggle was real in Races Two and Three to finish up the day in second.

Richard Goransson's INGA recovered well with great speed and pace to win Race Two as Ishida put down a hard chase to catch him. A repeat performance in the final race of the day proved too difficult for Goransson as Ishida out maneuvered him on the final run to the finish simultaneously making room for Valentin Zavadnikov's DYNAMIQ SYNERGY SAILING TEAM with Ed Baird on tactics to finish second instead, then Rombelli.

Headed into tomorrow's racing, Ishida is one stroke ahead of his closest opponent and with the forecast predicting light air, every position on the scoreboard could potentially be shaken to their very core.
The Melges 40 Grand Prix is proudly supported by Helly Hansen, Garmin Marine, Barracuda Communication and North Sails.