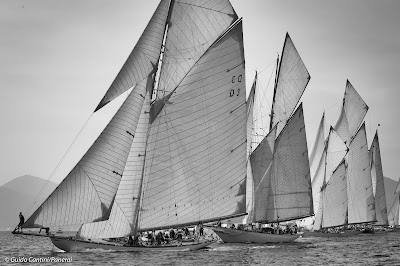 Last racing day for the 44-boats strong Dragon fleet, that closed the event in style. UK’s Yvan Bradbury was declared the winner of the 39th Régates Royales de Cannes, with Russia’s Anatoly Loginov getting silver. Classic yachts had one more race on a triangular course, better defining the overall scoreboard, in view of tomorrow’s final round.

Even before the Dragons got on the race course, set east of the famous Palm Beach, there were few doubts that UK’s  Yvan Bradbury on Blue Haze, was going to win the 39th edition of the Régates Royales, thanks to a solid margin on Anatoly Loginov on Annapurna. The British team only had to control the Russians to be on the safe side and take the trophy home with him, with France’s Jean Bréger on Ulysse and Germany’s Pedro Rebelo de Andrade on Pow Wowbattling for bronze. At the end of the day, Bradbury and his crew managed to finish in 24th place and grab victory with a six-points advantage on the Russians.

The last race was crucial to define the remaining top spots. The course shortened due to an extremely light and shifty wind, it was German Pedro Rebelo de Andrade to finish second and make it to the third step of the podium.

Among the 5.5, Merk Holowesko from Bahamas on New Moon is still leading with an impressive series of  six wins out of eight races, with Swiss Christian Bent Wilhemsen on Otto in second. In the Tofinou class France’s  Patrice Riboud on Pitch snatched victory from England’s Edward Fort on Pippa.

The Classics benefitted from a light wind to complete a race on a triangular course, with Cambria and Mariska duelling for the leadership, the latter winning yet another race in corrected time. Olympian, totally at ease in light airs, succeeded in leaving behind his nearly sistership Chips, skippered by Bruno Troublé.  Likewise Brendan Mc Carty's NY-40  Rowdy and Q Class  Leonore skippered by Italian Mauro Piani crossed in first and second  respectively, whilst Argentinean Daniel Sielecki’s Cippino only managed to finish in eighth place today, losing several points in the overall. These three boats will have the last say tomorrow for overall  victory in the regatta.