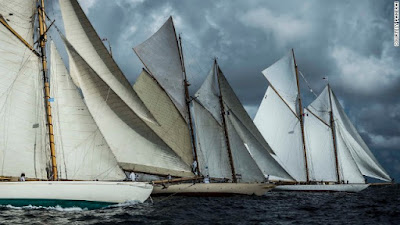 Just days after the Festival de la Plaisance (September12-17 septembre) Cannes  turns back to relive the glorious years of yachting and welcomes gaffers, schooners, sloops, J Class boats, one-designs from the XXth  century, 12 Metres, 5.5 Metres. One full week of racing off the beautiful Lérins islands  for a fleet made up of eight different categories, according to the boats’ size, rig and age.

Thirty-ninth edition
In 2017, Cannes will celebrate the 39th anniversary of the new format of the  Régates Royales, one of the oldest sailing races in the Mediterranean, since the first edition was held in 1929 as a tribute to the King Christian X of Denmark. The yacht club de Cannes is also one of the oldest in France, having been founded in the spring of 1859 as Société des Régates by the messieurs Béchard, Tripet-Skrypitzone, de Colquhoum and Bucket aiming at organizing the very first race in the Bay with yachts such as  Léro, Olga, Jeannette, Touriste  taking part, plus several local fishing and rowing boats.

The Régates Royales de Cannes are the last rendez-vous of the Trophée Panerai, a  true world championship for classic yachts and therefore some will give everything they have to grab the prestigious Trophy, to the likes of Brendan McCarty’s Rowdy, the Fighting Forty conceived by Nathanaël Herreshoff in 1916 that has few real competitors in stiff breeze in the Vintage Marconi class. Will  Kelpie (by Albert Mylne dating back to 1903), Estérel (Léon Sibille, 1912) snatch victory from Oriole (Nathanaël Herreshoff, 1905) in the old gaffers division? Or  Lulu (Thomas Rabot & Gustave Caillebotte, 1897) beat Véronique (Albert R. Luke,1907) and Rainbow III (William Fife,1927), and who will be getting gold among the more modern racers like Cholita, Ellad, Endeavour, France, Havsornen, Manitou, Skylard of 1937?

Les Dragon ont la flamme…
Like every autumn the Dragons will criss-cross the Bay of Cannes in one of the most populated and popular races in the class’ calendar with more than 45 crews, from 12 different countries. Some will be coming from far away, like the Australian Richard Franklin (Liquidity) other from closer, like the twelve French teams. Northern Europe is also well represented with the Dane Lars Broën (Hotlips) and Finns Christian Borenius (Thouban) and Sami Salomaa (Paloma) as well as Russia, with crews who have been dominating the recent events: Anatoly Loginov (Annapurna) and Mikhail Senatorov (Integrity). The will have to take into account competition coming from the UK, with Yvan Bradbury (Blue Haze), from Germany with Michaël Schmidt (3M) and from Italy, with veteran Giuseppe Duca (Cloud). This year two Turkish crews Ali Tezdiker (Josephine) and Ibrahim Arkun Demircan (Monday) will also line-up for the Régates Royales de Cannes 2017.