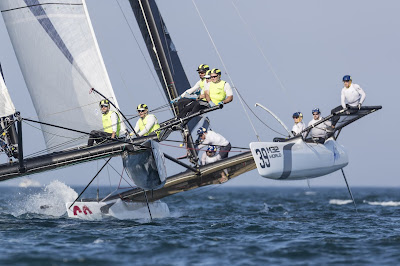 The M32 Catamaran showed its potential at the inaugural North America Championship with eleven teams ripping around Lake Michigan completing 14 races over the weekend with eight different race winners.  The regatta served as the "test event" for the 2018 World Championship and Chicago delivered. Determining the M32 North America Champion came down to the last race with REV skippered by Rick DeVos going into the final race with a two-point advantage.

James Prendergast and his Grave Digger racing team nailed the start and led from the first mark, but the battle for the regatta winner was fought in the middle of the fleet with Convexity and REV trading positions over the race. While REV kept it close enough to maintain the lead at the first reach & leeward gate, Convexity managed to stick a covering tack on the upwind that put REV back in the fleet and ultimately resulted in a regatta win by one point.
Chicago city centre again played perfect host today delivering a second session of 80 degree summer temperatures paired with light to moderate 10+ knots of breeze through most of the day, building later in the afternoon. Michigan based Rick DeVos commented on today's weather, "Conditions were variable all weekend with a lot to contend with as the breeze changed. You just have to deal with what you get."
The day did not start out well for Convexity with an OCS in race one, however, the team quickly regrouped to pull two back-to-back race wins in the next two racing with dominant starts. "The start has a huge impact on the whole thing, but especially in these lighter airs everybody is so close to the line there is just no margin for error." Said Wilson, continuing "It was super tough, super tight racing and thats certainly a good sign for the class." Coming into the day the local team were down in fourth position. "We were hoping to win but knew it would be very tough. Yesterday we had some bad races so to come back from that and ultimately win feels really good."
REV's Rick DeVos, who closed out just one point shy of Convexity commented, "We were hoping to hold off Convexity but in the last race we just couldn't. Its really good racing out there, everybody saw a good result throughout the event which is testament to this class growing talent."
On the subject of sailing in front of this beautiful urban backdrop, Rick responded, "Oh it's fantastic, I love this city. I'm from Michigan, just across the lake, so anytime I can get down here and spend time on the M32 is just fantastic."
The leaders coming into the final day was the Magenta Project skippered by Midwest local Sally Barkow. After a string of wins on the first day and dominating the starts, the all-female crew returned hoping to continue this success. They posted consistent mid-fleet results to keep them strongly within contention - such a key component in a two day regatta with 14 races, but with other competition so strong today Magenta end the day in third.
Newcomer to the M32 fleet, Extreme2's Dan Cheresh fought a tight mid-fleet battle with Ryan DeVos of XS Energy, ending the event on even points with the final race being the decider on count back and Cheresh just taking it. These minimal point gaps were truly the story of the regatta.
Today began with four separate pockets of tight point gaps and through the day these continually shifted, with the podium places in particular shifting after each race as Sunday afternoon's racing played out. The M32 North American fleet has attracted a very high level of talent showcased by the nine Corinthian and two professional teams this weekend. With events around the racing such as coffee mornings with the umpires and morning coach briefings, the fleet as a whole continues to grow and develop the class from within.
Amongst the crews sailing with Corinthian skippers at the M32 North America Championship included a host of world championship winners, Olympic medallists and Americas Cup sailors.
"These are high performance boats and the skills to sail them well are so transferrable. The simplicity in the design makes them easy to just jump on and perform well in." Said Matt Cassidy, trimmer with former America's Cup holder Oracle Team USA. "With a couple of good sailors onboard, you can easily build up a team of less experience and be competitive."
Hosting the North America Championship has been a testing ground ahead of the 2018 M32 World Championship which will take place in Chicago next summer with an expected 20-boat start list. If this weekend's close racing, near-perfect conditions and faultless hospitality are anything to go by then next year's World will be a sailing spectacular. As champion here at this weekend's championship, Don Wilson responded to comments about being the man to beat heading into the 2018 Worlds with, "This is definitely a good starting place but it's gonna take a hell of a lot of work to pull it off, and probably a little luck as well."
M32 North America Championship - Final Results