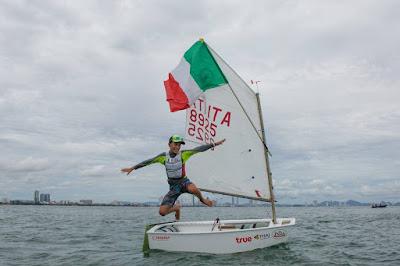 After a day of waiting for wind on the water, Italian sailor Marco Gradoni was hoisted, in his boat, onto the shoulders of his coach and supporters as the Italian flag waved above him, horns honked and a crowd cheered the newly anointed 2017 Optimist World Champion.

His return to shore marked the end of an emotional final day of the Optimist World Championship 2017. In the morning, one could see a mix of feelings on the faces of the 281 youth sailors from 62 countries, lining the beach, preparing to launch in listless conditions, hopeful of getting three more races on the scoreboard.

Some were looking forward to a much deserved rest after an eight day competition. Others appeared excited to have one last chance at improving their standing overall.

For the select few at the top of the fleet, however, there was a sense of anticipation, sheer determination to hold onto or improve their result, and hope that the last day of racing would be a great one.

The wind failed to show up for their date with destiny however. A planned start at 10.30am was delayed. At 11.30 am, there was only the faintest of breezes detectable on the start line. An hour later, it was near zero.

For those at the top of the leaderboard, it was an impatient wait for wind on the water followed by a suspenseful wait for the clock to run out, sailing instructions putting a 3pm end to any new races on the last day of the regatta.

The race committee cut that painful countdown short at near 2pm, abandoning all races and confirming the leaders of the pack as winners.

In the Top Female category, Spain's Maria Perello took gold. At just 12 years of age, she could prove a talent to watch with three more years in competitive Optimist racing.

Thailand's Palika Poonpat, a cousin of 2010 World Champion and two time Top Female Nopakkao Poonpat, took silver in the female ranks, and graduates out of the class this year. The USA's Charlotte Leigh won bronze.

Her team also goes home with two additional trophies - the Nation Cup for overall best combined performance of team members, and the IODA Challenge Cup for team racing. In the team racing division, China took silver, with three members in the top ranks of the individual series despite only arriving on the first day of registration.

Fifty-two other teams had arrived up to a week earlier to get accustomed to local conditions. Malaysia, frequent participants in Thai regattas, took bronze in the team racing division after several hard fought battles on the water.

The 2017 Optimist World Championship is organized by the Royal Varuna Yacht Club with the endorsement of the Yacht Racing Association of Thailand and the Junior Sailing Squadron of Thailand under the International Optimist Dinghy Association.

It is supported by strategic partners including Pattaya City, the Sports Authority of Thailand and the Thailand Convention and Exhibition Bureau. Co-sponsors include The Pizza Company, Apollo (Thailand), Thai Airways, and True Corporation.
(www.sailing.org)