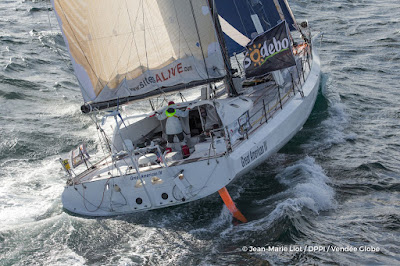 Conrad Colman on Foresight Natural Energy crossed the Equator back into the northern hemisphere this morning at 0845hrs UTC in tenth place in the Vendée Globe solo round the world race. This is another important milestone for the Kiwi-American skipper as he also negotiates the Doldrums. Colman looks like he is being blessed with a relatively straightforward passage of the ITCZ, the Doldrums, racing slightly east of north without too many squally clouds around. The weather models suggest he should hold on to mainly E’ly winds until he emerges into the NE’ly trade winds.


As he completes his third racing circumnavigation Colman is attuned to the need to stay extra vigilant for the climb north up the Atlantic back to Les Sables d’Olonne. “The ocean might seem empty and limitless at times but I know there will be lots of traffic as I approach Europe. I have come a long way and dealt with all kinds of drama from Mother Nature and so now I am doubly attentive to avoid any many made mischief. Radar on. Eyes outside the boat until the finish line,” Colman told his team today.

Sébastien Destremau (TechnoFirst - faceOcean), in 18th place, had a slow and erratic course after passing Cape Horn yesterday but was making 8 to 9kts northwards this afternoon looking to pass to the east of Staten Island this evening. The French skipper passed close to the hostile, lonely rock island to ensure he could get his best possible view. “When I was a little bit down a few days ago my brother Jean-Guy he said ‘look mate go there and look at it straight in the eyes and say ‘G’day Mate’.  I am turning left after this and going home,” said an emotional Destremau at the Horn yesterday.

Almost exactly 1500 miles in front of Destremau, in 17th place, Pieter Heerema the Dutch soloist on No Way Back has been enjoying himself in unexpectedly beneficial conditions. After many problematic and frustrating weeks early in the race when he fought many battles with his autopilot systems, often speaking of possible points to stop his race, Heerema is on great form, enjoying good speeds and much more at one with his boat – the final foiling IMOCA in the race.

“I am enjoying myself,” Heerema said. “Lady luck is grinning at me with a big smile. The weather is much more than the GRIB files. In fact I was worried that last night I would be flogging around and drifting but I had to take in two reefs and put the small jib on. I was flying. Now it is a bit up and down but it is great, the sea is almost flat. The swell is long and with me. So every few seconds I am picked up by a velvet hand and pushed forwards, accelerating big time. Last night I spent hours in the cockpit just getting the balance of the boat, really enjoying myself, completely forgetting I wanted to get some sleep.”

Six hundred miles SE of Rio the match race between Spain’s Didac Costa and French skipper Romain Attanasio is unrelenting, the competitive edge between the two is complemented by regular VHF conversations between them. Upwind in very light airs Costa is about eight miles ahead. American Rich Wilson on Great American IV nearly 350 miles north of the chasing duo is finding his way finally into a light E’ly trade wind to the NE of Rio and was making a steady eight to nine knots this afternoon. He is still losing miles to the race’s youngest skipper Alan Roura on La Fabrique, 158 miles to his north in 13th place.

Fabrice Amedeo (Newrest-Matmut) admitted today he harbours little hope of catching back up with 11th placed Arnaud Boissières (La Mie Caline). The skipper from La Chaume in Les Sables d’Olonne, who is on his third consecutive Vendée Globe, is 120 miles ahead of the journalist turned ocean racer Amedeo who said today:

“We have finally picked up some wind, which is allowing us to make headway north. I could see I was a couple knots slower than I should have been. I looked around at everything thinking I had an ingress of water or some other problem. I couldn’t see anything. I tried taking the boat backwards. I used my camera. In fact, I had a net caught in the port daggerboard. It was caught up in the daggerboard housing. I had to attach myself and hang upside down under the boat to see what was going on. I had to raise and lower the daggerboard several times to free it. So I lost a lot of ground to Arnaud (Boissières). Since then I’ve been back up to speed and am feeling much better. We have a straight line course for 3000 miles to the Azores High on the starboard tack with the trade winds in the Southern Hemisphere, then the Doldrums that I hope won’t be too unkind to us and then, after that the trade winds in the Northern Hemisphere although there are still some questions about the Azores high...”

In 12th place Amedeo admits he will run low on food and is already undertaking a basic rationing system: “I am resting a lot, as I have to ration my food. The quantity is limited and so I’m not getting all the calories I need, so feel tired. I’m not feeling energetic when at the winch. So I’m trying to save up my energy and enjoy myself. It’s not going to be much fun at the end of the race. I contacted the Race Doctor, Jean-Yves Chauve, who gave me some advice. I have three meals a day, two meals using freeze-dried food and then for breakfast, what is left over. Meat paste or sardines without anything to go with them for example. After breakfast I still feel hungry. You learn from your mistakes like this.”

Nandor Fa (Spirit of Hungary) in eighth place is negotiating the Azores High pressure but should hook into the south east of an Atlantic depression which will give him a fast passage into Les Sables d’Olonne were Fa is anticipated between February sixth and seventh. Meanwhile Louis Burton has 880 miles to finish to secure seventh place on his Bureau Vallée.

Rich Wilson (Great American IV): “We are almost up to the latitude of Rio de Janeiro, which will be a good milestone. After we get there, we’ll have to go through a series of areas where there may be quite a few oil rigs. We have them marked out in a broad region on the chart, so will have to be on high alert for about 75 miles or so, south to north. In the early evening the breeze dropped right down to zero. We had only had 5 or 7 knots of wind anyway, but it was out of the east and was supposed to be out of the northeast. Suddenly, we had southwest winds, 2 – 3 knots, very bizarre. The boat went in circles for 3 hours, and it was very frustrating. Finally, after 4 hours of circles, the breeze started to come in from proper direction, and we got 5 knots of wind. When you have zero, 5 is quite a lot. You can sail on that, going in the right direction. It was very frustrating, to have that happen, in the middle of the GRIB files that were just showing consistent winds. Getting past Rio will be a good job, a good milestone. Then, it will be on to Salvador, that will be the next milestone, then Recife will be next. Then, the Equator!”

Jordi Griso (team manager for Didac Costa): “The St. Helena high is leading to light winds at the moment. There is very little wind, but all is well on board. He’s enjoying having Romain Attanasio close by. They have more or less been within sight of each other for two or three days. They have talked to each other several times over the radio. Didac has in theory enough food for 105 days. We added in some more food in case he had problems, so he has enough for 110. So unless there is a major upset, he should be fine until the finish. His code 0 is damaged and each time he uses it, he has to carry out repairs afterwards, but apart from that he doesn’t have any major problems and he is feeling positive. The presence of a rival alongside means he is in race mode.”

Pieter Heerema (No Way Back): “There are all kinds of little highs and lows, dancing around each other. This is the birthplace of the lows which get sent off towards South Africa and into the circular movement around Antarctica. They move around a bit. What I am trying to do is stick my nose between a high and a low. It does not look too aggressive and if I can do this I can maybe be squeezed into the trade winds in three or four days. My food is getting a little bit boring. I am slowly running out of things, especially breakfast things. I am looking forwards to anything fresh on shore, nothing fancy, fresh salad, fresh fruit, anything like that I would kill for it.”
(www.vendeeglobe.org)