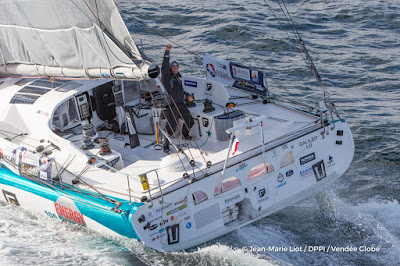 The battle for fourth to sixth places in the Vendée Globe is set to go to the wire. Jean-Pierre Dick, Yann Eliès and Jean Le Cam are expected to finish within hours of each other. But, even though Dick was holding a lead of just on 50 miles over Eliès and 86 miles over popular veteran Le Cam, there is no certainty at all that he will be able to hold on to fourth and so, at best, repeat his fourth place finish of 2012-13.

The trio which are due to finish into Les Sables d’Olonne on a mythical 80 days around the world schedule are forecast to run into lighter winds for their last night at sea. Already Dick (St Michel-Virbac) had slowed to 11 kts while Eliès was still two knots quicker. Le Cam meanwhile should benefit from the improving wind angle which may allow him to cut the corner, sailing inside the curve of his rivals’ course.

There is a considerable possibility of upset. Several times, JP Dick has expressed his frustrations that his race has not gone better. After building a new generation, foiling IMOCA he had been tipped as a possible winner and certainly harboured an expectation that he would better his fourth place of 2012-13. Dick looks set to finish some six days faster than in 2013 and Le Cam some eight days faster than his last Vendée Globe.
If he can gain a place in the final run in to the Nouch buoy finish line, Le Cam would also equal his fifth place from the last edition. It would seem that the skipper likely to be happiest, might be Eliès who will finish his first Vendée Globe and so lay to rest memories of his 2008-9 rescue south of Australia when he broke his femur. Speaking to Vendée Globe LIVE today Dick, feeling pressurised by two three times winners of La Solitaire du Figaro,  confirmed that he cannot wait for the end of his race to come: “I really want to finish now and more particularly in fourth place. Finishing fifth or sixth would be hugely disappointing. I’m going to be the first to move into some lighter winds, so those behind will narrow the gap. It’s like that almost every time. Just as in the South Atlantic, when I had four days of light airs. Yann and Jean caught me, whereas I previously had a lead of 300 miles. I’m going to have to remain cautious until the finish, particularly as those behind me have the experience of the Solitaire du Figaro and this is the sort of situation they do well in. Between them, they have won that event six times! I am enjoying this final part of the race with good speeds and on a good boat.”

It was a visibly tired, but elated Jérémie Beyou (Maître COQ) who described to a crowded Vendée Globe LIVE audience his feelings about his third place finish, and the huge welcome he received on Tuesday night. Beyou stated that he will be back to challenge for a fourth victory in La Solitaire du Figaro this summer wearing the colours of Maître CoQ, but he will move on to look for a new, bigger sponsor or group of sponsors to challenge for the win in 2020: “I’ve been with Maître CoQ for five years. Early on it was hard. In June I’ll be doing my final race with them – the Solitaire du Figaro. We have talked about what follows and my goal for the next Vendée Globe doesn’t correspond to what they can offer. So I’m looking for a new partner with higher ambitions. I don’t want to aim just for third place, so I want different means, a different boat, like Armel has managed to do with Banque Populaire. It’s the end of a great adventure but also new doors will be opening. All the work we have done with Maître CoQ will help. We have a great team in place that must stay together to aim for a win in the Vendée Globe.”

Of his choice to retro-fit foils to the former Banque Populaire which finished second in the 2012-13 race: “Three foilers in the first three places… We didn’t have any technical problems with the foils. I hit the port foil and the leading edge was affected, but no serious damage. So the modification was successful. If you look at Seb’s problem, it may seem that such a choice is dangerous, but we didn’t have anything like that. And the boat was faster. 17 knots of wind and the boat does 18 knots. Sometimes you have to be careful using them. Sometimes you worry, but sometimes you push hard using them. If I finished third, it is largely due to the foils. I may not have been faster than SMA, but that was down to sail choices. The figures speak for themselves and we saw that in comparison with our rivals.”

Beyou completes the Vendée Globe podium. Alex Thomson, the British skipper, finds himself between first and third placed skippers who sailed against each other at the age of nine in Optimists, who grew up as close friends on the Bay of Morlaix and whose career trajectories have scribed parallel curves since they were little: “I prefer to talk about Armel. I’m 40 and he’s 39. We started out together when we were 8 or 9 on Optimists in Morlaix Bay. He has won the Figaro twice, and now the Vendée Globe- an incredible career path. I could never have imagined thirty years ago, we would be where we are now. We have been lucky to be able to earn our living with our passion. We are both privileged. In Morlaix Bay there was perhaps a magic potion, something in the air… the weather conditions, support, teachers, trainers. Then there was Nicolas Troussel too and Yann Eliès not far away in St. Brieuc. There was the political choice to support sailing in these places.”

Of Elies he said: “I was watching Yann Eliès in the south. I got the feeling he was holding back a bit, but after his previous experience… He wanted a competitive project and it’s incredible that he even returned to this race. I’m not sure I would have had the strength to do that after going through what he went through before. I’ll be here tomorrow to hear what he has to say, because what he has done is incredible.”

And of his race Beyou concluded: “The weather determines the final outcome. It was a very fast trip down the Atlantic. 78 days represents a couple of days more than the boat’s potential. Because we encountered some horrible calms particularly on the way back between 4° S and 4°N. Alex didn’t really have the Doldrums. Jean-Pierre neither. We saw Thomas Coville and now Francis Joyon getting records, but it’s either very fast or very slow. We’re going to have to change our idea about the weather patterns because everything seems to be changing.”

Nandor Fa was crossing the equator this evening returning to the Northern Hemisphere on Spirit of Hungary lying in a solid eighth place, while Pieter Heerema is on course to become the first Dutch solo skipper to race round Cape Horn. Nandor Fa: “It is fantastic for me to be getting to the Equator. It is always a big task to be getting across the Doldrums and for me at the moment it seems like my luck is in. I have wind all over and I am doing 13kts of boat speed in not a lot of wind. I am one degree to the equator and going well in the Doldrums area. I push myself and this is a big jump, a big step for me. The heat is always hard for me. It is 32 degrees in the cabin and if I go out it is difficult because of the temperature.”

Romain Attanasio (Famille Mary-Etamine du Lys): “It’s an incredibly good feeling to be back in the Atlantic. I’m over the moon. It feels like home, even if I have never been here before. The Southern Ocean is magical, yet hostile. I was told it would be surfing, but in the end, I had difficult conditions. I have a small leak in the stern after my hull delamination in South Africa and today is the first day my hands haven’t been cold from mopping up the water. Those ahead of me are finding it hard to get back up the Atlantic, but we have better conditions here. The next 1000 miles will be downwind in good winds. I lied to my friends before the race saying I had only spent 25 days alone at sea before. In fact, it was only sixteen! In the third week of racing, I started to feel time dragging, but then I got back in the rhythm. My son left me a chart in the boat and wrote we’ll see you on 5th February. So now, I have added a 1 in front of that…”

Nandor Fa (Spirit of Hungary): “I am a 63 year old guy and in in my head, in my mind I have a fantastic future, I am planning a new boat, I am planning how that boat would sail faster and safely, how to be aggressive, but my body is not like it was 20 years ago and not even the same as two years ago, I feel my age. And so my dreams and the facts are two different independent things. Of course I am dreaming. I have a lot of experience I would like to do it, but really, truly I don’t think I would. My plan is to be with my family and to be with my wife, to hug my wife and my children, my grandsons, and to just to do nothing for a few days. That is what I think about now.”

Conrad Colman (Foresight Natural Energy): “I'm still a long way from the actual Doldrums but I feel like I'm getting a good warm up. First I had the calms and now the squalls. Since sundown yesterday I have been sailing upwind against a constant deluge of isolated black storm clouds and their associated rains and wind shifts. I haven't slept more than a few minutes at a time as I set my alarm for a 20 minute nap only for the boat to lean over heavily as the stronger wind announces the arrival of a new cloud. The cloud passes, the boat stands up. We're now under powered. Adjust the sails. Back on track, all ok. Maybe I can sleep now? Ah, what's that? The stars wink out ahead, blanketed by the next cloud. Here we go again!”
(www.vendeeglobe.org)