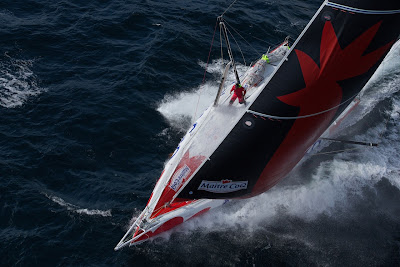 After setting out on five different round the world races or record attempts, Jérémie Beyou today rounded Cape Horn, laying to rest the spectres of his past attempts as he holds an excellent, hard earned third place overall in this eighth edition of the Vendée Globe solo round the world race.     Beyou passed the famous Cape at 13.44hrs UTC, rounding some four days, one hour and 10 minutes after the race leader Armel Le Cléac’h (Banque Populaire VIII) and two days two hours and two minutes after the British sailor Alex Thomson (Hugo Boss).


He abandoned early in the Vendée Globes of 2008-9 and 2012-13, but Beyou has sailed an astute race so far, dealing with several significant technical issues, not least the failure of his communications equipment. He can receive only limited weather information through a Skyfile service. He passed Cape Horn 51 days 1 hour and 42 minutes after the start, the third successive skipper to break the benchmark set in 2012 by François Gabart at 52d 6hrs 18min. Beyou has made fast progress in to Cape Horn over the last 36 hours approaching his first Horn with 20-30kt westerly winds. Although he is 800 miles behind second placed Alex Thomson, the weather models seem to suggest there may be a chance for the skipper of Maître CoQ to pull back some miles on both the leaders by being able to sail a more westerly course, so cutting the corner.

Race leader Armel Le Cléac’h, some 900 miles to the SE of Mar del Plata, Argentina, appears to have crossed the high pressure ridge which has been blocking his course northwards with a band of lighter winds. With his lead to second placed Alex Thomson cut to 284 nautical miles now, the French skipper’s losses are stabilised for the moment but there is one more blocking high pressure zone to be breached before the leaders can even contemplate the Saint Helena anticyclone which appears complicated.

Thomson confirmed this morning that he had struggled to download good weather information as he has had internet communication problems: “I have just slowed down a bit because it is quite windy, I am just going to chill out for a few hours. I don’t have any wind instruments right now. It is windy. So I have slowed down in the meantime. And also I don’t have much weather information. When I was going really fast with all the water coming over the bow, over the satellite antenna, that is the last antenna I have left and I can’t get any internet. I can’t make any calls and so I have rolled the jib away just now and I am sailing with just the mainsail but I am still making averages of 17-18kts. I will sail like this for a few hours. So otherwise it is all good, no problems. I could do with a little bit of sleep, I will do that now as I go slowly.”

Next to pass Cape Horn should be Jean-Pierre Dick who holds fourth place on StMichel-Virbac. He is now 300 miles ahead of Yann Eliès. Conrad Colman (Foresight Natural Energy) appears to be set for the toughest 48 hours of his Vendée Globe as he negotiates a nasty low pressure system which he is trying to stay in front of for as long as possible. Colman reported good initial sea conditions on the front of the low earlier this morning and had sorted out a technical problem with his pilots before the worst of the storm arrives.

Rich Wilson spoke today to 2004-5 Vendée Globe skipper Bruce Schwab who became the first American skipper to finish when he took ninth on his Ocean Planet. Schwab quipped that the five skippers grouped just in front of him, all slowed to avoid this same stormy low, could not wish for a better shepherd coming along behind them. In 15th place Wilson, on his second Vendée Globe, said today:

“We are coming back into the tail end of the depression. It is not moving away quite as fast as we thought and so we got a little into the seaway which is quite chaotic. The others up ahead are getting it worse than I am. We are really lucky in that when this was forecast to develop, our group of six were back far enough. When it started out we would have been in the middle of it. I was quite surprised at how big the seas got for the amount of wind we did have. And then in fact as the wind diminished how the sea state maintained itself. It is just totally chaotic. I went up on the foredeck this morning to get the fractional gennaker ready to go and I could not stand up. I had to crawl. It was chaos. I was thinking about the bull riders who have it easy by comparison as they only have to stay on the bull for eight seconds. We have to stay on all the time.”

Fabrice Amedeo (Newrest-Matmut): “A lot has been going on in the past ten days. It started with my halyard problems. Then in the low north of the Kerguelens I ripped my mainsail between second and third reef. So I had to carry out repairs. That meant I lost a lot of time and miles. I managed to carry out these repairs three or four days ago. I had been watching the timing of the deep low south of New Zealand for some time. Those who went by me got there too early and had to slow down. On the night of 25th, I realised the hook on my gennaker was stuck. I had to climb to the top of the mast, but I couldn’t get to the hook and ended up cutting the sail lashing and losing it. Looking at the wind and conditions ahead, I didn’t have too much time to lose. So I have lost my gennaker. That may seem a radical choice, but seeing I only had a couple of hours to act and I was at the top of the mast, I didn’t really have any choice.”

Arnaud Boissières (La Mie Câline): “It’s another start after being on stand-by with five other competitors. I’m relieved to have let the storm go by. I’m a bit worried for Conrad (Colman), who is in the thick of it. Alan (Roura), Fabrice (Amedeo) and I have been writing to each other. We each have our own way of sailing. I’m closer to Fabrice. Enda O’Coineen is more up and down. Eric Bellion has peak speeds of eighteen knots for hours and hours and then we get the impression that he eases off. The rankings keep changing, which spices things up a bit. I’m not too unhappy about where I am, even if I lost a lot of ground with all my repair jobs.”

Sébastien Destremau (TechnoFirst-faceOcean): “Passing Cape Leeuwin is important for me. This is the second of the three capes. I divide up my life between France and Australia. My children are out there. Hi kids I’m here! I’ll, be stopping before entering the Pacific to do a thorough check of the boat. I was thinking of stopping in the South of Australia. But the low means I would have to go the long way around to get there. Then, it’s a bit too close to my kids. It would have been hard setting off again. I’m thinking of stopping in Tasmania. If conditions are good, I’ll continue to New Zealand. I damaged a couple ribs a few days ago. On the right, it’s fine, but on the left side, it’s really painful.  I’m talking it slow carrying out manoeuvres and I crawl around on all fours.”
(www.vendeeglobe.org)