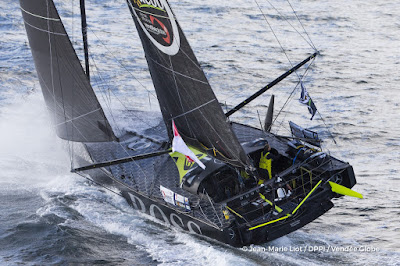 The battle for the top spot in the Vendée Globe showed no sign of letting up today as the frontrunners prepare to celebrate one week in the Southern Ocean. Three days after snatching the lead from arch rival Alex Thomson, French skipper Armel Le Cléac'h was today clinging to first place by just twelve miles as the pair forge a path east at 48 degrees south.


Since passing the Cape of Good Hope on the morning of November 24 the leading duo have been exchanging blows, gaining and losing miles on a daily basis. Le Cléac'h initially overtook Thomson, whose boat Hugo Boss is lacking a starboard foil, and pulled out a lead of around 30 miles. But since then Thomson, the only Brit in the solo round the world race, has been able to get within throwing distance of Le Cléac'h because the conditions north of the Kerguelen Islands, a remote archipelago deep in the southern Indian Ocean, are not conducive to foiling.
After more than 9,000 nautical miles of racing the evidence seems to point to Le Cléac'h's Banque Populaire VIII having the edge in foiling conditions but Hugo Boss being the quicker boat off the foils. Indeed, in the 24 hours leading up to the 1400 UTC position report Hugo Boss was the quickest boat in the fleet, averaging 20.8 knots compared to Banque Populaire's 20.4. “We’ve been in the Southern Ocean now for a week, switching between fronts and low-pressure areas,” said Le Cléac'h, runner up in the past two editions of the Vendée Globe.

“We’re currently ahead of a front but the wind will ease off this evening. We’ll have to wait and see whether we’re still ahead of the record pace at Cape Horn - it’s all down to the weather. There’s a fight on with Alex, which means the pressure is on us to keep up the pace. But we mustn’t do just any old thing either and it’s not a matter of being faster than him all the time. I’m trying to do it at my own pace and with my own way of sailing. Alex is on the attack – but taking into account the sea state and the angle from the wind, we’re not necessarily in foiling mode. A few days ago when that was the case I was a bit faster than him. We’ll see what happens in the next few days.”

More than 3,500 miles behind the leaders the bulk of the Vendée Globe fleet was rejoicing in rising speeds as they began to feel the effects of a South Atlantic depression. French skipper Fabrice Amedeo, in 14th place on Newrest Matmut, reported winds of 20 knots potentially building to 40 knots as the low pressure system strengthens. “It was a big challenge over the last two days to get round this high pressure and get more wind,” Amedeo said. “Finally we're on the road to the Cape of Good Hope. The wind will increase gradually in the next 24 hours. Tomorrow I'll have more wind as the low pressure arrives, perhaps 40 knots.”

Seventy miles to the west 17th placed Hungarian skipper Nandor Fa was in equally good spirits. “I feel good now we're moving out of the high pressure system, and we're on the highway, but we're just on the edge at the moment,” he said. “The wind is getting stronger and I will get faster as I move a bit further south. The boat likes these conditions, so I'm happy.”
Quotes

Alex Thomson (Hugo Boss): “I think it's very nice that Armel is still in touch with me. Obviously if I had a foil he probably wouldn't be. It's good to have him there as a pacemaker, someone to be able to measure yourself against. We've got similar weather, we're going similar speeds, we've got similar software, and the routing we're doing is telling us similar things, but it is interesting cos it's almost like having someone to check your decisions with. If he's going the way I'm going I can feel confident that we're all going the right way. And I guess if he goes somewhere different I get the opportunity to look at where he's going and figure it out. So I think it makes us both faster – it's literally like having a pace maker. As well as that there's the safety, obviously.”

Kito de Pavant (Bastide Otio): Yesterday I was treated to a quiet day. Sunshine, light winds, calmer seas and a deck that was more or less dry. It’s true that it’s not that warm for late November (= late May back home). To be honest, I even had to put the heater back on. I managed to get some rest. Had a good nap. Slept a bit too long this morning as I found it hard to open my eyes... I did have plenty of manoeuvres to do because of the light conditions. Getting up a few extra square metres, but then had to bring them down again, when the wind got back up. Gybed several times to get back on track... This morning, it’s dull, dull, dull. And I can’t see any birds in my wake.”

Nandor Fa (Spirit of Hungary): “I would say things are quite ok but it was a very frightening night, some frightening moments steering my boat, and I'm a little bit tired. I had a digital problem with my computer. I lost the VMG data and I was fighting with it the whole night without sleeping. It was quite tiring for me. There are slight problems still but the boat is alright. I'm a little bit upset because yesterday happened a bit differently to what I was expecting. The wind came from a direction that was not promised by the forecast so that's why I lost quite a lot of miles. Now I'm moving again and that makes me happy.”
(www.vendeeglobe.org)