Vendée Globe - The gift that keeps on giving...or taking? 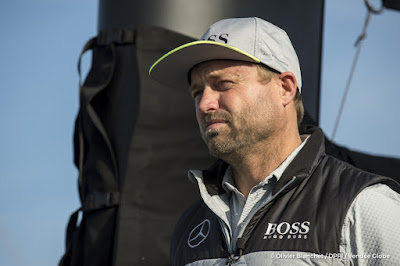 Their objective, rational views on the manner in which gains and losses come and go during the Vendée Globe solo round the world race, share the same cold logic. Small miles can be won and lost by long sleepless hours of sweat and toil, but the big differences - hundreds of miles - can simply be down to good timing or bad timing. Right place right time, or, conversely, wrong place wrong time.   Having seen an 818 mile lead evaporate over the course of one week to 101 miles this Thursday afternoon, Armel Le Cléac'h was resolute, even appearing matter of fact, today when he spoke from his Banque Populaire VIII to Vendée Globe Race HQ in Paris.


And so too Hungary's hard bitten Nandor Fa, in eighth place on Spirit of Hungary, is equally accepting that it is inevitable his rival astern, Conrad Colman will now gain back some big miles as he benefits from riding the leading edge of a frontal system, while Fa has spent a day slowed yesterday.

Le Cléac'h, the French pre-race favourite to win, said today: "I haven’t been lucky, but that is what happens in ocean racing and you have to deal with it." He added: "I was well ahead at Cape Horn, but since then I have had to deal with some tricky weather. The high is blocking the route ahead of Banque Populaire. And I’m being caught from behind. The 800-mile lead I had has disappeared to practically nothing. I remain positive. I entered the area of light winds yesterday evening. I hope to come out tomorrow and get some more stable winds to get way from this complicated area. The goal now is to stay ahead."

Although second placed Alex Thomson has remained quicker than Le Cléac'h this afternon, Thomson is expected to slow later this evening. But predictions suggest he may get to as close to within 50 miles of his French rival. "It’s not easy crossing this high. There are often differences between what you see on the weather files and what is happening outside actually on the water. There can be wind holes and it’s hard to identify them. I just hope to get some more luck in the next few hours. Alex will be running into the high too and we’ll only really see the measure of the gap in a few days.”

Writing today of the expected catch up by his younger Colman who was his co-skipper during the Barcelona World Race, Fa explained: "Miles made by continuous sleepless attention and loads of work, can disappear within moments. We were racing head-to-head with Conrad for a long time, both of us worked hard to get the most out of our boats and weather possibilities. There was no significant difference between us until we entered a different weather area, which gave Conrad about 60 miles advantage. Then I worked hard for days to catch a front, which allowed me to keep running in high speed for several days. He couldn’t catch the front and his 60 miles advantage became a 600 miles advantage to me. This has nothing to do with our capabilities or that our boats, this is the pure result of opportunities given and taken by global weather systems."

He continues, "After a long period of high speed sailing I ran into several transition zones between fronts, that slowed me down. I couldn’t avoid them, I was forced to fight my way through. In the meantime Conrad was caught up by a front, with which he’s been running after me and within two days he reduced our distance by 200 miles."

Such big gains and losses are not unusual on the Vendée Globe. In 2000-1 Michel Desjoyeaux lost the best part of 500 miles of a lead when he was slowed in the South Atlantic in the high pressure areas. And in the following edition, 2004-5, Briton Mike Golding gained more than 600 miles in the Southern Ocean going on to lead at the Falkland Islands.

"On the way down the South Atlantic I had read a piece by some journalist who said my race was over, that I had no chance of winning the Vendée Globe now. Well, that was like a red rag to a bull!" Golding recalled with a smile today, "But really in the south I just went seamlessly from one system to another and was fast all the way across. That is how it is sometimes. I think Alex has now got himself into a really strong position but it is very difficult to predict what will happen."

Jean Pierre Dick should round Cape Horn for his fifth time at around 0500hrs UTC on Friday morning, and therefore still in the hours of darkness. But the skipper of StMichel-Virbac who has been round twice before during Vendée Globe races and twice in Barcelona World Races relishes the moment of release: "There should be quite a lot of wind, at least thirty knots. Nothing too nasty, but it will be impressive. After a month in the cold, I can’t wait for this part to be over. It will be back to more normal sailing."

Spanish skipper Didac Costa has had to make a composite repair to the link arm for his self steering gear during a tough 48 hours for the 16th placed skipper. In 18th, Sébastien Destremau has confirmed he will make his pit stop south of New Zealand to check and repair before heading into the Pacific. And Romain Attanasio in 17th on La Famille Mary- Etamine du Lys had his rescue beacon activated by mistake when his boat partially filled with water. But the situation was very quickly under control and the Australian rescue authorities duly notified.

Jean-Pierre Dick (StMichel-Virbac): “None of the weather forecasts predicted this wind hole, which has appeared. It was horrible. I spent my day in there. I lost at least twelve hours or 100-150 miles to Jérémie (Beyou) but also to Yann (Eliès) and Jean (Le Cam).It’s a bit disappointing and really annoying to get stuck like that. I’m focusing now on the route to the Horn, which I should round tomorrow morning.”

Eric Bellion (CommeUnSeulHomme): “I never imagined I’d be in the Top 10. it wasn’t ever a goal and isn’t one now. I’m pleased about it but I am well aware of how that has happened. In the South the rankings are all over the place. We’re just trying to make it to the Horn and then after that the race will begin again. In the group of five, there are some great sailors and that encourages me to get the boat going well. But I don’t want to pile the pressure on myself either. I’ll try to accelerate when I can and ease off when necessary.”

Nandor Fa (Spirit of Hungary): "Our race is different from inshore racing. Uniquely in our world of racing, significant advantages that were acquired through continuous sleepless attention and loads of work, can disappear within moments. Nothing’s for sure for the leader Armel. He also developed a 800 mile distance from Alex before Cape Horn, and now he’s been slowed by light wind conditions on the South-Atlantic. The BOSS was given the chance to run up to him, and their match-race begins again. The message of all this, is that you can try to get the most out of your own route, but if someone else is given more favourable conditions, there’s pretty much nothing you can do about it. Literally anything can happen until the you cross the finish line, you can never be sure."