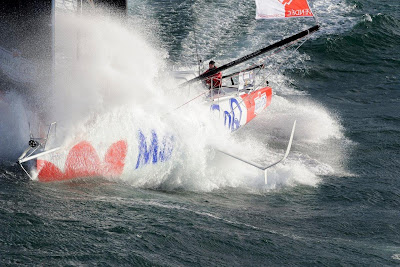 Lying third he is, once again, more than 750 miles behind the fast moving Brit, Alex Thomson on Hugo Boss and some 1100 miles behind the race leader Le Cléac’h. Beyou grew up on the Bay of Morlaix with Le Cléac’h and when they were young, Beyou took the young Armel out on his father’s Quarter Tonner. Armed with the Le Cléac’h’s former Banque Populaire, which finished second in the last race, Beyou has found himself at times frustrated by satellite comms problems – he cannot access high resolution weather information – he has struggled with his mast track and his mainsail hook.


But he has battled on resolutely, latterly sailing fast on the approach to his first solo Cape Horn. His watchword has always been to sail within his limits to reach the Horn.   Beyou also retired from the first Barcelona World Race in 2007-8 after being dismasted with Sidney Gavignet in the Indian Ocean. After each disappointment, Beyou has come back stronger and fought harder for his Vendée Globe.

In 2008-9 he had to retire into Recife after only 16 days of racing when two spreader roots failed and his rigging was damaged. His second Vendée Globe, the first in the colours of Maître CoQ ended with keel ram damage after just over one week of racing. “They say real champions are those who can fight back,” said Beyou at the time. He bounced back and claimed a third Solitaire du Figaro title in the interim and prepared his Vendée Globe programme immaculately, not least winning the Transat New York Vendée and taking second in the 2014 Route du Rhum.

“I have set out around the world in the Vendée Globe, the Barcelona World Race and the Jules Verne Trophy, but have never made it around the Horn. So it’s about time!” Beyou said today.

“The seas are very rough, so it will be a relief to get around. Especially after all the previous failed attempts. It’s time also to see something different as down here it isn’t that nice. After that maybe we will be back into real racing mode and I’ll be able to see where I am in comparison to the two ahead of me. It’s a new race that starts. I’m going to have to work hard in these final weeks…” He added: “The Pacific was a bit long with conditions that were not that easy. So I’m pleased to be arriving at Cape Horn and getting out of this zone. I crossed through a front during the night with quite a lot of wind. I should be downwind until Cape Horn and afterwards too I hope as the wind is set to strengthen at the longitude of the cape. So I’ll have gybes to do and it’s going to be fairly technical. We’re going to have to be careful to avoid doing anything silly with these winds.”

A complex South Atlantic
Alex Thomson has managed to pull back small miles on leader Le Cléac’h today, Monday, reducing his deficit to the skipper who has led the race since December 3rd to under 400 miles. Le Cléac’h faces another slowdown tonight with a high pressure ridge. The climb up the South Atlantic remains complex.

Behind Beyou, Jean Pierre Dick (St Michel-Virbac) has moved another 100 miles clear of the chasing duo Yann Eliès and Jean Le Cam who have continued to struggle with the centre of a low pressure system. Dick is making 22kts this afternoon on his foiling St Michel-Virbac while Eliès is making seven knots. Conrad Colman (Foresight Natural Energy) is racing north and east to avoid the worst of a big, stormy low which is spinning down from the north and west of him, but his timing and strategy should see him safe from the worst of a bad system which is predicted to hold more than 70kts.

And behind the system, the group of six which had slowed to miss the storm, are now making faster progress again. Eric Bellion (Commeunseulhomme) said this morning: “I have had a gust of 37-38 knots and I’m making twenty knots. The idea was to follow the low and not to go too fast and hit the worst of it. I have three reefs in the main. We went from total calm to a storm. I had my coffee with Alan a couple hours ago.

It suddenly changed. Everything went flying in the boat. The wind is whistling around. I slept for eight hours during the night. It was a bit like a pit stop before as I checked everything on the boat. It’s always a bit frustrating when you have thousands of miles left to sail to see your speed down to five knots.”

Quotes
Jean Le Cam (Finistère Mer Vent): “I got slowed in light airs, so had time to do a video and check out everything on the boat. In my dreams I’d like to complete the race in less than 80 days. It will chiefly depend on what the conditions are like when we sail back up. Conditions there can be very random. As far as the Cape of Good Hope, we can’t complain about what we’re getting. It’s straight ahead, while in front they are likely to get held up a bit. And we may make it through just as things are getting easier. Before we get there it looks like it’s going to be light airs off the cape.  But we’ll see, as the forecasts change very quickly in this zone. I’ll be getting to the Horn on 31st at 21h06 (laughs).”

Didac Costa (One Planet, One Ocean): “The last front has allowed me to sail fast and on course for almost 48 hours, but the Christmas truce is over. The wind has begun to drop and a storm is forming to the south of Australia in the next few hours and will deepen quickly making difficult the path towards the East in the coming days. This area between Australia and New Zealand, in addition to being meteorologically complex due to rapidly developing phenomena, has an added difficulty: the shore to the north and the ice exclusion zone to the south limit the possibilities of "negotiating" or dodging the lows. To avoid sailing upwind -the course that these boats least like- I am trying to go as far south as possible and maybe I will end up waiting for the new favourable wind. I repaired the damage in the J3 some days ago, but after a full check I detected principles of delamination in several areas of the sail. I decided to repair it properly before hoisting it again. So far with the boat’s movement it has been impossible to do this job and I will try to do it when the sea state calms down. I passed the second of the great capes yesterday: Cape Leeuwin. I hope to be halfway soon. From then on, I will stop moving away from Les Sables to approach it...”

Eric Bellion (Commeunseulhomme): “Twelve years ago I crossed the Pacific with a couple of friends on a small 8m boat. It took us 47 days. So crossing the longitude of Auckland it will feel like I’m back somewhere I know. I know the route and that is reassuring.”

Nandor Fa (HUN) Spirit of Hungary: “I ran out of breeze yesterday morning completely. There was nothing. I had to sail 80 miles to the north to find new breeze which is what I now have SW’ly in 20kts, making 12-16kts now which is good but in effect that is half a day which I lost. I wanted to make some maintenance on the boat but sometimes I made only three knots of boat speed. The sea was smooth and the sails flapping. For the next couple of days I can move with this NW’ly wind I will get, and can make eight or nine hundred miles with it. I will need to sail close to the ice border because when a huge anticyclone forms above me then just 50 miles to the north there will be nothing. Before the start I said I did not care about what place I finish in. I still don’t care. To be eighth just now is really nice but it so far from the finish. I am more interested in keeping the boat alive, moving as fast as possible and as safe as possible.”
(www.vendeeglobe.org)