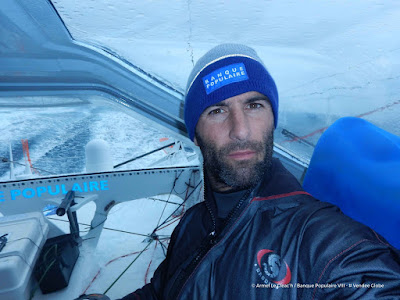 Armel Le Cléac’h is expected to lead the eighth edition of the Vendée Globe solo round the world race around its most feared but most universally welcomed landmark, Cape Horn, tomorrow around midday. The French skipper should pass the notorious southernmost tip of South America with the biggest lead since January 2001 when Michel Desjoyeaux led English skipper Ellen MacArthur by some 600 miles.   That over the ensuing seven days Desjoyeaux’s lead over MacArthur in early 2001 was cut to some 140 miles in the sticky South Atlantic high pressure system, as that edition of the race effectively re-started there, will continue to give hope to second placed Alex Thomson on Hugo Boss.


The only British skipper in this race struggled today with a very disorderly small low pressure cell which has slowed him still more while Le Cléac’h has remained relatively speedy. At 595 miles behind Banque Populaire VIII, Thomson may find himself racing upwind, albeit on his favoured starboard tack tomorrow before finally making back some ground after Le Cléac’h passes the Horn.

3rd in 2008-9, 2nd in 2012-13, 1st in 2016-17?
For Le Cléac'h it will be the third time in successive editions of the Vendée Globe that he has rounded the Horn in the top three. In 2008-9 he was third behind Roland Jourdain and eventual winner Michel Desjoyeaux. And in the last edition he was just two and a half hours behind victor François Gabart. In the 2004-5 race Vincent Riou lead Jean Le Cam around Cape Horn by 15 hours and went on to win. Desjoyeaux led Roland Jourdain in early 2009 by nine hours and won the race ahead of Le Cléac'h after Jourdain's keel bulb dropped off south of the Azores.

After Alex Thomson established a new record for the stage from Les Sables d’Olonne to the Cape of Good Hope, on 24th November, some five days and one hour faster than the mark set in 2012 by Le Cléac’h, there looks set to be little in the way of significant net gain or loss on that advance since. A relatively fast Indian Ocean has been followed by a passive, complicated Pacific and so Le Cléac’h seems likely to pass in somewhere around 47 days.

On this schedule Le Cléac'h should reduce the record of Francois Gabart by a matter of five days and some hours. At this same time on the first day of 2013, Gabart had slashed four days and nine hours off his mentor Michel Desjoyeaux's mark set in January 2009. Thomson will be buoyed by the expectation that the weather after Cape Horn does finally look a little more complicated for the race leader, who has enjoyed particularly smooth, assured transition periods, not least managing to multiply a margin of some 15 or so miles to the comfortable cushion he looks set to round Cape Horn by.
SMA Solution
Paul Meilhat, who lay in third place, continues to plough a forlorn furrow northwards into lighter winds after his keel ram cracked. His team have found a solution, a replacement from Maître CoQ, the sistership which the SMA skipper spent 25 days racing alongside, and which raced as Le Cléach's Banque Populaire in 2012, duelling around the globe with MACIF which is the compromised SMA. Their plan seems to be to send a team to fit the replacement ram and SMA continue her course unclassified.

After a few very fast days on his foils since passing New Zealand Jean-Pierre Dick - who finished fourth in the last edition, is now up to fourth and 270 miles ahead of his closest rivals. But he has run into a ridge of high pressure. Yann Eliès (Queguiner-Leucémie Espoir) and Jean Le Cam (Finistère Mer Vent) have regained around thirty miles on JP Dick, while Jérémie Beyou (Maître CoQ) has accelerated. The South Pacific has its ups and downs, winners and losers, but this morning's life enhancing consolation for JP was a pod of dolphins dancing around his boat.

The race is close again too for the group of five entering the South Pacific. The youngest competitor in the fleet Alan Roura, 23-years old, with his boat which dates back to 2000 keeping up with four IMOCAs from the 2007-2008 generation. They are all within 145 miles of each other with Eric Bellion (CommeUnSeulHomme) still keeping his foot hard down. Over the past 48 hours, the 40-year old racing the powerful Finot Conq designed former DCNS, who sees the Vendée Globe as his big adventure has been the fastest in the fleet clocking up 400 miles a day and averaging 17 knots.

Four hundred miles from Melbourne, Australia, Stéphane Le Diraison the skipper of La Compagnie du Lit-Boulogne Billancourt has run into a wind hole. This is tough for the skipper, who was only making 4.5 knots when he had thirty knots of wind. Le Diraison has had to use his DIY talents to improve his jury rig. “I had kept around a ten square metre piece of the mainsail after the boat was dismasted. I have become a sail maker setting up a mainsail suitable for my rig. It’s been successful. I have managed to raise my jury rig and now I have a bit more sail up. I shall be able to sail higher when I have headwinds. Otherwise there was the risk of ending up back where I started.”

Fabrice Amedeo (Newrest-Matmut): “We have just had three complicated days. It’s not completely over yet. There wasn’t just the technical problems, but a problem of mindset too. I have now changed the latter. In the low 3 or 4 days ago, I had fifty knots. I tore my sail and got a big hole in it. For three days I sailed with three reefs so lost a lot of ground. Psychologically, it was hard seeing the group catch me and then overtake me. I think I may have found a way to consolidate my sail repair. I’m waiting for the wind to ease tomorrow to complete the repair job.”

Jean-Pierre Dick (StMichel Virbac):  "It looks like a complicated day ahead. It’s tiring as there is a lot of trimming and manoeuvres to do. Today I carried out an inspection of the boat and got the hydro-generator working. I’d prefer to be speeding towards Cape Horn. I was lucky to get to the front just ahead of Yann and Jean and got away because of that. I’ve just lost it. These fast days meant I narrowed the gap to Jérémie. It’s always a new beginning when you enter these transition zones. You can get caught or close the gap. I haven’t planned anything for Christmas. I don’t even know where the bags are that correspond to that. It’s going to be a surprise."

Romain Attanasio, (Famille Mary-Etamine du Lys): “It’s a lot better now. Almost like being on holiday. I had to go a long way north to avoid the low. I could have done without that after losing so much time in South Africa.”

Alan Roura (La Fabrique): “The wind got up this morning to peak speeds of around thirty knots, which confirms that the front is gradually arriving. It’s going to be quite good for me to get some stronger winds. I manage to cope as well or even better than some of the others in windy weather. After that this evening the wind will drop down to 13-15 knots and it’s likely we’ll be under spinnaker for several days. Eric and Enda are catching me. The race is on in the Southern Ocean. Three boats lined up after almost fifty days of racing and yet each boat is very different from the other. Yesterday I felt a bit low about being caught like that. But for the moment, I am keeping up my average speed of fifteen knots. Superbigou is back. The fastest boat of her generation. This boat is truly incredible! With a youngster as her skipper, yet so well placed, no wonder
she’s a legend…”

Rich Wilson (USA) Great American IV: “We had a nice encounter with Eric yesterday. I am just astonished at how fast these guys are going. My only disappointment is that I seem to be a little bit off the pace. Eric seems to be going faster than our group. He has that little trinquette (staysail) which is really working well for him and he is going quite fast. It was nice to get past Cape Leeuwin but it is also a reminder from 2008-9 that there is a long, long way to go. There are few more milestones down here, Tasmania, New Zealand, getting past New Zealand and the AEZ is a bit of a choke point. Once we are stable downwind I just don’t seem to have the nerves of steel of these guys. I am not willing to push the fractional gennaker and push the polars. But when you are around other boats it does push you.”
(www.vendeeglobe.org)