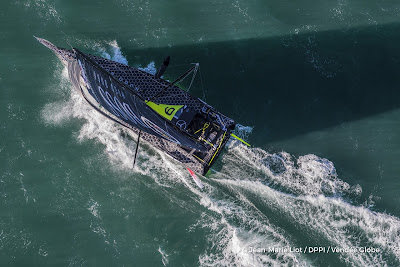 At the 0800 UTC position update Le Cléac'h moved into first place for the first time since losing the lead to Thomson two weeks ago.   The change in frontrunner came almost three weeks into the solo round the world race as the top two skippers tried to navigate through a tricky patch of light winds on their way to the Southern Ocean's big breeze.   With Thomson gybing north Le Cléac'h chose to continue east, and when the rankings came through the French sailor's Banque Populaire VIII was eight nautical miles ahead.


However, three hours later it was all change again, this time Le Cléac'h opting to head north while Thomson went east.   By 1100 UTC Thomson was back in the driving seat with a 16nm buffer - a spot he has commanded for all but today's three-hour blip since November 12 – but both he and Le Cléac'h were only making 12 knots of speed in similar wind.

Le Cléac'h said the most important thing was not his ranking but that he had caught Thomson up.
“It’s not easy trying to make headway as we’re in a light patch between two lows,” he said. “We’re trying to pick our way through in the shifty conditions, but it feels good to have caught up with Alex. I’ve repositioned myself to the north now because things were stalling and my main focus is staying in some breeze.”

Three hundred miles adrift of the leading pair, third placed Sebastien Josse was today struggling in light winds but speeds will pick up when his Edmond de Rothschild is scooped up by the depression currently being ridden by Paul Meilhat in fourth and Jeremie Beyou in fifth.

“We have a light wind with more high pressure than the others, but it’s set to pick up in 24 hours and then we can sail quite fast and straight to Australia,” Josse said. “Three weeks in and my boat’s in great shape as we haven’t had much bad weather since the start so we’ve been quick, as shown my Alex’s records. It’s amazing how fast the boats are but we haven’t had the real Vendée Globe yet.”

Nearly 2,000nm behind the leaders the tussle between Jean-Pierre Dick, Thomas Ruyant and Jean Le Cam entered a new phase, the latter losing out after the weather front the trio was hooked onto passed over his yacht Finistère Mer Vent.  The 57-year-old, competing in his fourth Vendée Globe, revealed that he lost further miles when he slept through his alarm.

“Last night I was constantly making sail changes, the wind going from 35 to 15 knots in the blink of an eye,” he said. “I finally settled with two reefs in the main and a storm sail up, watched it for a while longer and then got some shut-eye. Unfortunately, I then slept through my alarm and woke up five hours later in very calm conditions, still under two reefs and storm sail… the whole works!”

While Le Cam must now dive south in search of better breeze, Ruyant and Dick are set to extend their lead as they profit from the leading edge of the low pressure.  Further misery awaits the biggest group of boats from Louis Burton's Bureau Vallée in 11th to Enda O'Coineen's Kilcullen Voyager – Team Ireland in 23rd as another high moves into their path.

The only sailor in that back pack still smiling is Alan Roura from Switzerland – the La Fabrique skipper could soon find himself jumping up the leaderboard if he is able to skirt the bottom of the high pressure.
Morgan Lagravière, forced out of racing two days ago with rudder damage, arrived safely in Cape Town at 0830 UTC on Safran. Vincent Riou, also heading to the South African port, was due to make land late this evening.

Meanwhile the international jury decided to hand Jeremie Beyou a two-hour penalty for accidentally breaking the seal on his engine when he fell on it.

Armel Le Cléac’h (Banque Populaire): “It’s not easy trying to make headway as we’re in a light patch between two lows. We’re trying to pick our way through in the shifty conditions, but it feels good to have caught up with Alex. This morning’s conditions have meant that we’ve finally been able to go out on deck and tick off a few jobs and give the boat a once over. I haven’t stopped this morning and my hands are feeling it a bit now with all the Sikaflex, tape and lines.
I’ve repositioned myself to the North now because things were stalling and my main focus is staying in some breeze. It’s good to get a breather in a calmer environment, the wind dropping off from 20 to 10 and below. We’ve been sailing in Roaring 40s conditions for a few days so we’ve been through various shades of grey and fog, you can’t see far and the nights are quite short. We’ll hook onto the next low on Monday which will carry us past Kerguelen and into the middle of the Indian Ocean. It’s complicated with the ice exclusion zone as there’s a very narrow corridor between it and Kerguelen. It’ll be tricky as further North the sea bed rises making for breaking seas and we’ll have to focus on carefully negotiating our way through the islands and fishermen.
I’m taking each day as it comes. I don’t know what day it is but I do know the date. The time that counts on the boat relates to strategy, weather, manoeuvres, heading, sail area and food sacks, which are gradually diminishing.
We’ve had good conditions to go fast and the use of the foils is all about striking a balance. I handle that my way and others do it a different way. Yesterday, I was still using the foil, but that’s not the case now in under 15 knots. Once we’re at the leading edge of the front the average speeds will be high until it catches up with us. One thing for sure, the foils are here to stay.”

Jean Le Cam (Finistere Mer Vent): “I’ve been putting in stacks of manoeuvres of late! A successful manoeuvre is one where you don’t have any issues, which isn’t easy on your own, but I’m happy when it comes off. It’s always important to think the manoeuvre through first and check everything’s ready to go. Personally, I always go through it in my head first, but it’s hard to know what’s normal when you’re a human! People think you’re crazy doing 4 Vendee Globes but isn’t it better to circle the earth than go round in circles at home? Maybe us Frenchies are made differently. In any case, it’d be very dull if we were all the same! Another good thing about doing a Vendee Globe is that nobody can see you when you stuff up! Last night I was constantly making sail changes, the wind going from 35 to 15 knots in the blink of an eye. I finally settled with 2 reefs in the main and ORC, watched it for a while longer and then got some shut-eye. Unfortunately, I then slept through my alarm and woke up 5 hours later in very calm conditions… still under two reefs and ORC… the whole works! Later on, it was pretty breezy under gennaker and I hit the remote to bear away and nothing happened. I was on stand-by mode apparently so we broached right over till we were horizontal, me at the foot of the mast. That was bad enough, but then I did it twice! Still, if you’re going to make a silly mistake, better to do it twice just to be sure!”

Sébastien Josse (Edmond de Rothschild) “Our damaged occurred in a weather phase where it was really important not to fall behind. At the time, we were on the leading edge of a front and I knew it was important not to drag my heels so as to make the most of the breeze. Logically that’s exactly what Alex (Thomson) and Armel (Le Cléac’h) were able to do but I couldn’t follow suit… The four hours’ stoppage time to get the rudder system back up and running cost very dear because I haven’t had the same weather conditions as them since that time and I’m lagging behind the system. That said, you have to keep things in perspective when you see the retirements, especially given that we have a very long way to go. I’m preparing for the next opportunity to pounce. Right now, I’m going slowly as I don’t have much breeze. I’m waiting for the pressure to arrive but we’re not doing too bad. We have a light wind with more high pressure than the others, but it’s set to pick up in 24 hours and then we can sail quite fast and straight to Australia. This is the 12th year of Alex’s Vendee Globe campaign and he’s growing with every edition. We all know he’s a great sailor and now he’s proven that. Foils are not a big deal now as it’s windy and for the next 4 weeks it’s not a big issue whether you have foils or not, but it will be important for the climb up the Atlantic. My boat’s in great shape as we haven’t had much bad weather since the start so we’ve been quick, as shown my Alex’s records. It’s amazing how fast the boats are but we haven’t had the real Vendee Globe yet!”

Jordi Griso, team manager One Planet One Ocean (Didac Costa): “Didac is doing quite well, but there's a big problem onboard. He had a sail that broke two days ago. It was the J1. It was an old sail that was used for the Barcelona World Race in 2010 so it was quite old. We knew that it could happen but it happened too soon for us. We can't do anything about it now, it's impossible to repair. Didac has to manage without this sail now. Conditions are not very easy because he's going upwind with waves. He expects the wind to decrease a little bit and be more of a reach over the next two days, which will be better. He's expecting to negotiate the high pressure and finally reach the southerly conditions in maybe a week. He’s in good spirits. He's happy to be on the boat in the race after all the things that happened in Les Sables after the start. Didac is making nice speeds and heading south. The light winds have been a little frustrating but you can't do anything to change it so you just have to deal it. He's now trying to prepare the boat for the south, making a few repairs to the generator and the electronics. This is the main goal over the next five days. It helps his performance to have a boat 300 miles ahead [Seb Destremau] – it helps to show you that you can win back some miles with every position update. I think he needs to have different wind conditions to catch him, and that's not easy in the current scenario.”

Paul Meilhat (SMA): “The wind’s kicked back in and it’s nice to have Jérémie Beyou alongside. I’m managing to keep pace so I’m happy. Conditions are favouring the foils, so I’m just trying to maintain the same speed. The last 2 days I’ve done a lot of little repair jobs. The boat’s quite lively but I’m managing to eat and sleep well. We’re going to try to stay ahead of this low for as long as possible – 2 days I think. The nights are a lot shorter now and I’ve seen my first albatrosses. Tonight I’ll round the Cape of Good Hope, so it’s a symbolic stage for me!”
(www.vendeeglobe.org)