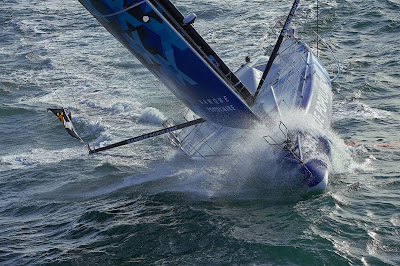 Armel Le Cléac'h is slowly starting to pull away from Alex Thomson after snatching the Vendée Globe lead from him yesterday. In the last 24 hours the Banque Populaire VIII skipper has gone from 12 nautical miles adrift of Thomson's Hugo Boss to 31nm in front.    Breton sailor Le Cléac'h, runner up in the last two editions of the Vendée Globe, racked up 467 nm in since 0500 UTC yesterday while Thomson was only able to sail 423 miles.


And since last night he has averaged between two and three knots faster than the British skipper. The reason for the difference in speed is that both boats are sailing on port tack, meaning Thomson is not able to use his damaged starboard foil. Le Cléac'h however so far remains unscathed, and at 0500 UTC was the quickest boat in the fleet at 22 knots, the 20-knot winds from the north providing prime foiling conditions. The leading pair are due to pass north of the Kerguelen Islands in around 48 hours, by which point Le Cléac'h could have built up an even bigger margin.

Seb Josse on Edmond de Rothschild was this morning travelling east at more than 21 knots but is now 500nm off the pace having paid the price for having to transition between two weather systems. “It took a long time and the transition wasn’t easy,” he said. “I ran into a wall this weekend, where there was no wind, but it got up again yesterday evening and now it’s looking better. Now I’m looking ahead to another transition. We should be able to make good progress for two or three days, which isn’t too bad.

”While still in touch with the leaders, Josse will also be looking over his shoulder at the two skippers coming up behind him – Paul Meilhat and Jérémie Beyou. Despite having no weather information due to a broken satellite receiver on Maître Coq, fifth-placed Beyou travelled 470nm in the last 24 hours, the furthest in the fleet. Meanwhile, almost 3,500nm behind the frontrunners, the main pack of skippers was still caught in the St Helena High in fickle breeze of just five knots. It has given hope to the most westerly skippers of Alan Roura, Enda O'Coineen and Alan Roura, that they might be able to catch and maybe overtake the pack by skirting south of the anticyclone. Conrad Colman, in 15th on Foresight Natural Energy, said he was dreaming of the stronger breeze waiting further down the track. “I’m focusing on getting to the South Atlantic lows,” he said. “I’m fed up with the highs and light airs.”

Tanguy de Lamotte officially retired from the Vendée Globe at 0050 UTC after passing the Nouch Sud buoy off Les Sables d'Olonne. His shore team is now onboard Initiatives Coeur and they will enter the race's home port at midday with the high tide. Prior to entering the famous entrance channel de Lamotte sailed a course that appears on the race tracker as a heart – a nod to the charity he supports which raises money for heart surgery for children.

Quotes
Sébastien Josse (Edmond de Rothschild): “I’m sailing along averaging twenty knots with lots of birds circling me, petrels, albatrosses… it’s a rather gentle entry into the Indian Ocean. I took advantage to smarten the boat up a bit. Now I’m looking ahead to another transition. We should be able to make good progress for two or three days, which isn’t too bad.”

Conrad Colman (Foresight Natural Energy): “At the moment, I only have six knots of wind, so it’s going to a difficult day. The way out is 200 miles further south and the week has got off to a complicated start. I crossed paths with Kojiro (Shiraishi). We chatted and took photos. I have been talking a lot to Nandor Fa with whom I raced in the Barcelona World Race and we tease each other a bit. There is a nice little battle going on in our group with Fabrice Amedeo, Louis Burton etc… and it is highly motivating to race against each other. Now, I’m focusing on getting to the South Atlantic lows. It’s the Southern Ocean I have been dreaming of in the Vendée Globe, strong winds and heavy weather, where I feel at ease. I can’t wait to get down there…”

Enda O Coineen (Kilcullen Voyager Team Ireland) in his message last night: “It was like a sudden 'wake-up' call when the anticipated wind shift came in. From 9 knots of warm north westerly to a chilling south easterly at 20 knots. No more South Atlantic Residents Association 'gentle 'debates. Now was a call to 'Arms'. The banging and rattling of the carbon boat was once again like being tumbled around in a washing machine. Having negotiated through the permanent cold front coming across from Brazil, we have now headed west of the bunch and the hope is to get down the ice zone and Roaring Forties pronto in a calculated risk. Another 'wake up' was an unexpected landfall in the middle of the ocean. We almost ran into the Brazilian Atlantic Islands, "Ilas Martin Vaz" 600 miles off the coast. I passed within 2 miles of Ilas da Trindade, the largest at 620 meters high and 10 sq. k - majestic rising out of the skyline. During the afternoon, I opened the engine cover to discover the base of the engine almost flooded. The engine and electric pump did not work so it took me 40 minutes to get all the water out manually. Left unchecked within a few days we could have lost the engine and a valuable source to charge our batteries, complimenting the two hydrogenators. I think the water is draining in from the water ballast thanks - another projet to solve tomorrow.” (www.vendeeglobe.org)