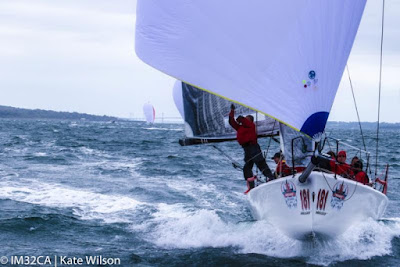 Newport, RI - New England nor'easters are signified by not only by their strong winds, but also their driving rain, and on the second day of the 2016 Melges 32 World Championship hosted by Sail Newport, competitors returned to the Newport Shipyard with three hearty races completed and no need to wash off the boats, foul weather gear or sails. The rain did all the work. At the halfway point of the regatta, the standings are still tight and despite the wet conditions, the sailing has been full throttle and extremely competitive.

Shaking off an OCS on Day One, Ryan DeVos' Volpe used his years of Melges 32 experience and owned the pin end in Races Three and Four. Both starts allowed DeVos to put his bow down and rumble for max speed while tactician Mark Mendelblatt picked his way up the first beats like a surgeon. Using solid speed all the way around the track, Ryan was able to fend off International Class President Giangiacomo Serena di Lapigio on G-Spot and his older brother Rick DeVos at the helm of Delta.  He then tangled with Pieter Taselaar's Bliksem in the middle race only to extend on the final run and take their second crystal race winner bowl.


Ryan Devos commented on a wild and wet Day Two. "We had really fun conditions beside the sideways rain. In the first two races, we had clean starts at the pin and were able to play the shifts pretty effectively. Overall we climbed up the leader-board with a few bullets which makes all the difference in a fleet like this."
Wasting no time, PRO Anderson Reggio and got the third race of the day underway at 1330, but this time DeVos' Volpe found themselves premature and had to re-round. Nailing the pin end was Serena Di Lapigio who stepped into a solid left shift and played the fleet like a violin, ultimately winning by 200 yards. Serena Di Lapigio summed up his race win, "The day was good. We had a penalty in the second race which hurt, but we understand the on-the-water-umpires are king. Winning the last race by a large margin was a great feeling and overall a great day of racing."

Battling hard in the peloton of Race 5 was Richard Goransson at the helm of Inga From Sweden who claimed a 'regatta saving' second place finish ahead of  Rick DeVos - a model of consistency with three third place finishes for the day.

FIT TO BE TIED
The amatuer competition raged on today with Corinthian teams getting a little more serious about getting ahead. The Day Two playbook resulted in a tit-for-tat battle between event leader Chris Wientjes aboard Stormvogel and Morgan Kiss at the helm of Hydra, now tied with equal points.
"We felt faster as a group and overall we executed our positions better. More time on the water always helps us get better and we will Keep on making improvements as a team," commented helmsman Morgan Kiss.
The Hydra team's tenacity was highly rewarded on Day Two as they were named Corinthian Boat of the Day!
MEDIA AND RACING COVERAGE
Every day, 2016 Melges 32 World Championship racing updates are posted online at the Official Melges 32 Facebook Page by Newport Live Media. Tune in for the latest racing information, results, video interviews, and photos. Race reports and press releases will be available online each day post-racing at melges32.com.